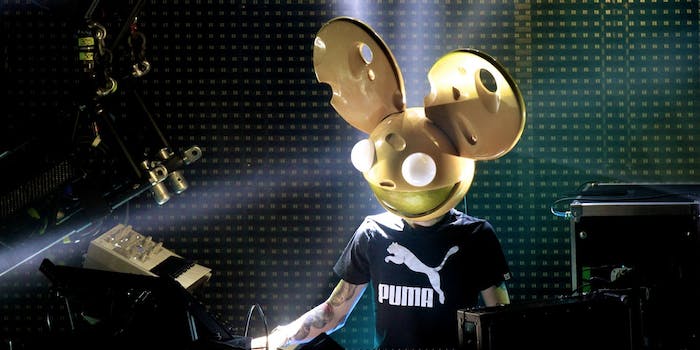 Disney files opposition to Deadmau5’s attempt to trademark his logo

People could totally confuse a cartoon mouse and an electronic muscian. Right? Maybe?

Giant mouse ears have been part of Deadmau5’s public image for years, but for some reason it’s taken until now for Disney object.

Deadmau5’s signature ear-hats do bear a certain resemblance to Mickey Mouse, but it’s difficult to imagine mistaking him for a Disney character. Also, after years of shows and public appearances where he wears some version of the mouse ears and mask, they’re probably more recognizable than Deadmau5’s actual face.

On Wednesday, Deadmau5 (real name Joel Zimmerman) tweeted, “landed home to some interesting news: looks like Disney officially just filed in opposition of my trademark… lawyer up mickey.” His attorney went on to tell TMZ that the Deadmau5 ear logo is trademarked in more than 30 countries, and that he applied for a U.S. trademark last year.

But according to Disney, Deadmau5’s not-quite-trademarked mouse ears could damage Disney’s business around the world. Needless to say, Deadmau5 was not impressed with this argument.

Disney thinks you might confuse an established electronic musician / performer with a cartoon mouse. That’s how stupid they think you are.

wishes upon star to become the thing i am today. becomes thing. gets stomped on. hahah wut? seems legit.

You can kind of see where he’s coming from on this one. A 33-year-old electronic music producer does not seem like a serious threat to a gigantic corporation best known for animated family entertainment—even if his hat does resemble one of their logos.