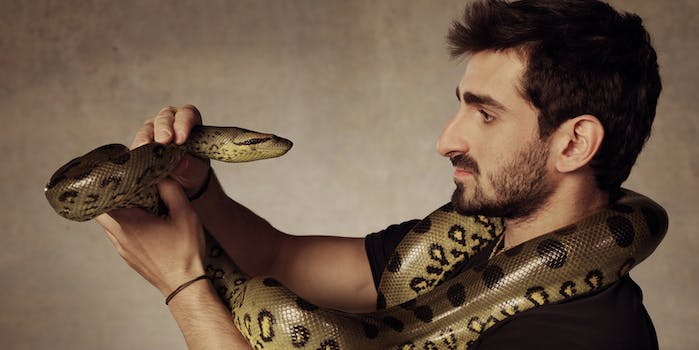 Discovery Channel will show man being ‘eaten alive’ by an anaconda

Where some would ask "why," Paul Rosolie asks, "why not?"

The Internet is justifiably bewildered over Discovery Channel’s promotion of a special called “Eaten Alive,” in which an avowed lover of snakes will allow himself to be swallowed by an anaconda. According to Discovery, “naturalist and wildlife filmmaker Paul Rosolie [will enter] the belly of an anaconda in a custom-built snake-proof suit.” All we can say is that Nicki Minaj better be hosting this thing.

Even with Rosolie tweeting up a storm about the stunt and a teaser trailer promising nothing less than Crocodile-Hunter-meets-Jackass, it feels more like a marketing hoax than educational programming. Plus, Discovery won’t say how Rosolie plans to get out of the anaconda, if you know what we’re saying.

If u know me – I would never hurt a living thing. But you’ll have to watch #EatenAlive to find out how it goes down! https://t.co/QvxZO2dS3V

#EatenAlive is on the front page of @reddit they tell me – big snakes eat big meals! pic.twitter.com/1FJZNqQ3he

We reached out to Discovery to ask if this is all a big put-on and, if not, whether any snakes were starved during pre-production. They have yet to reply. Odds are we’ll just have to tune in and see for ourselves. Of course, that means Discovery has already won. Better luck next time, History Channel special about giants.