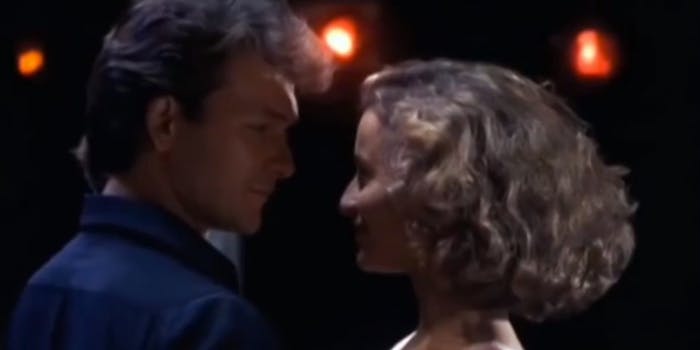 ‘Dirty Dancing’ without music is kind of awkward

Baby is definitely not in a corner.

Dirty Dancing is nearly 30 years old, which should make some of us feel pretty ancient. But one part of the iconic movie has never aged: the final dance scene between Baby (Jennifer Grey) and Johnny (Patrick Swayze).

The song that soundtracked that scene, “(I’ve Had) the Time of My Life,” is part of what makes it so iconic, and went on to fill mixtapes and wedding receptions for decades after. So what would that scene be like with no music? Well, awkward.

Mario Wienerroither brings you this latest musicless video, which features no music but lots of squeaking and heavy breathing and grunting added in for comedic value. If you just listened to the clip, it might border on NSFW.

It’s not as good as “Dancing in the Street” without music, but it’s close.