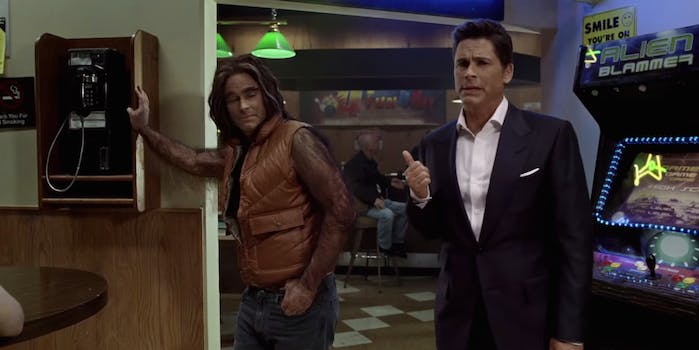 Mourning the doppelgängers as DirecTV pulls the Rob Lowe ads.

A consumer watchdog group is calling for DirecTV to pull its ads featuring actor Rob Lowe and his many alter egos after Comcast filed a complaint.

It’s easy to picture Comcast, which is often cast as the villain in almost every news story, as being overly sensitive about being mocked by the less normal and attractive Rob Lowe, but its complaints weren’t entirely without warrant. The commercials, which have been running for the past few months, claimed that DirecTV had “better reliability than cable” and “shorter service wait times.”

Well, that’s not exactly true, the Better Business Bureau National Advertising Division said. The claims made by DirecTV are actually “unsupported.” Since airing the ads, DirecTV has gained subscribers, plenty of buzz, and even controversy.

In response, DirecTV said in a statement that “the various Rob Lowe advertisements are so outlandish and exaggerated that no reasonable consumer would believe that the statements being made… need to be substantiated,” demonstrating that maybe the best way to handle a situation is maybe not to insult your potential customer base.

Although DirecTV doesn’t have to stop running any of the ads because of the National Advertising Division’s findings, it did plan to pull the ads by the end of the month—but it could bring them back if it wanted.

Until then, we’re left with the Rob Lowe ads in bite-sized form, often in a place where we have to watch ads to watch an ad: YouTube. Lowe has created plenty of characters, and since the Internet is forever, we can still admire and cringe at them even when DirecTV moves onto the next celebrity endorsement, left to mourn the best and worst of them.

(Of course, you could always just hang out with regular Rob Lowe and geek out about The West Wing, but that’s what Netflix is for.)

You don’t just not want to hang out with him. You might also want to get a restraining order; cable’s the least of his problems.

He may be fun for an hour or two, but you wouldn’t want to spend anymore time with him than that. Also, how does he even have cable?

It was Lowe’s character’s comments about not being able to pee in public that drew ire from an advocacy group for people who suffer from shy bladder syndrome, but once he’s with the right people he may hopefully feel more comfortable. And if not, that’s OK too.

It’s easy to laugh at him thinking that there are listening devices hidden in our cheese (because, well, it is silly), but considering how much the government can legally listen in do you really blame him?

Stay out all night, head home before he wakes up full of regret.

He’s a bro. Bros are pretty cool. Keep him away from the electronics when his team is down, but otherwise he should totally be DTP (down to party) after GTL.

He’s kinda like Meathead Rob Lowe. Since mostly nobody cares about high school cliques, you’ll always know someone at the local bar when you come home for the holidays and someone guaranteed to relive that nostalgia trip.

He may be useless when bringing in everything for a party, but upper arm strength isn’t everything. Plus, there’s squeeze bottles so opening jars is kinda obsolete now.

Even though he can’t always groom himself, he’ll be able to clean up the hair around him, which is something that shedding pets can’t do. And who knows, he might be a great person with the hair—with plenty of undiscovered talent. Remember Teen Wolf? Everyone loved him.