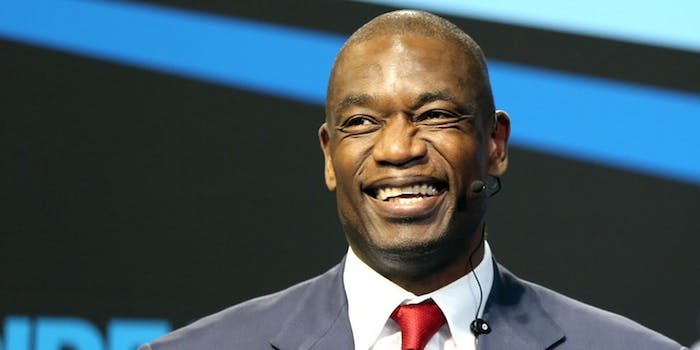 Photo via Doha Stadium Plus Qatar/Flickr

Did Dikembe Mutombo reveal in a tweet that the NBA draft lottery is rigged?

Is the NBA's best finger-wagger in on the conspiracy?

Despite the fact they will become the first major American sports team to wear a sponsored jersey patch, the Philadelphia 76ers were horrendously bad this past year. The Sixers finished the NBA season with a 10-72 record—but that doesn’t mean they automatically get the No. 1 overall pick in the upcoming NBA draft.

Based on the way the NBA lottery works, Philadelphia had a 27 percent chance of being awarded the No. 1 pick. However, since many NBA fans believe the lottery is rigged—this goes all the way back to the 1985 draft when, somehow, the Knicks went No. 1 overall and got to draft Patrick Ewing because of, maybe, a frozen envelope—this tweet from former NBA star Dikembe Mutombo raised some eyebrows.

Since he tweeted it out hours in advance.

Soon after, Mutombo deleted the tweet, replacing it with this.

Sorry, guys.Got excited about the @sixers odds and got ahead of myself.Still keeping my fingers crossed for tonight. pic.twitter.com/u6bFaNTJml

But when it was revealed Tuesday night the Sixers had actually won the No. 1 overall pick, the Twitter conspiracy crowd went crazy.

Lottery is definitely fixed. Mutombo knew this hours ago

While Mutombo was a dynamic player and a Hall of Fame center, he’s been retired for seven years. But if he’s looking to get into the world of soothsaying, his services could be in demand.