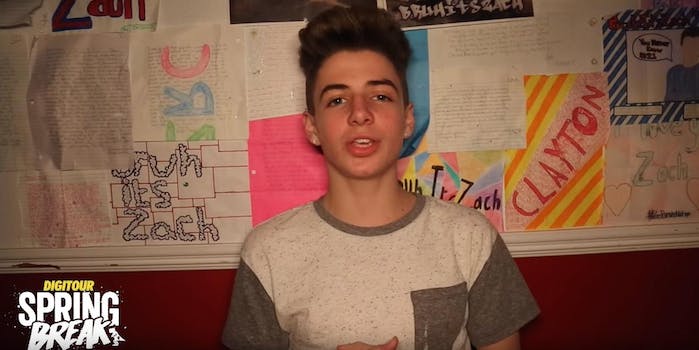 DigiTour Media gets ready for spring break with 28-city tour

Is it heading to a city near you?

With its latest announcement, DigiTour Media is shouting “spring break!” The company known for producing live events that feature social media stars has announced the Spring Break tour, which will bring a group of digital media influencers to 28 cities in the US.

As has been the case with some of DigiTour’s other recent events, the creators who will hit the road for Spring Break are a young, up-and-coming bunch who have medium-sized followings online. The most recognizable name within the lineup is Crawford Collins, who is known for making videos with his brother Chris and has 1.6 million followers on Vine. Joining him on the tour will be Mark Thomas, Loren Gray, Weston Koury, and the members of 5Quad, a fledgling online video “supergroup.”

The stars of Spring Break all appeared in a video introducing the tour. It can be found on DigiTour’s YouTube channel.

“We listen to our fans, as a result this line up and Spring Break tour were born from those conversations,” said Meridith Valiando Rojas, DigiTour Co-Founder and CEO, in a press release. “Some of the talent, like 5Quad and Crawford we’ve worked with before and we’re bringing back due to popular demand. Others like Loren Gray, DuhItzMark and Weston Koury we discovered on Musical.ly and YouNow and represent a new wave of talent.”

DigiTour’s Spring Break will begin on April 1st in Anaheim and will weave its way back-and-forth across the country before concluding in Sacramento on May 5th. Tickets for those two shows, as well as the 26 others that will occur during Spring Break, are available from the DigiTour website. The base ticket price is $25; for fans who wish to get up close to their favorite creators, VIP packages start at $130.