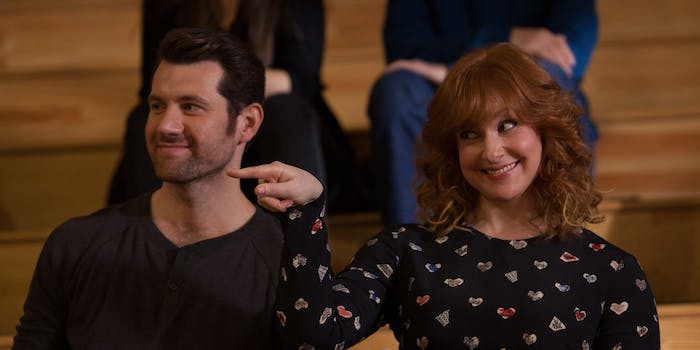 The jokes come fast in season 2 of ‘Difficult People’

A darkly comic show about fame in an era of niche TV.

In a recent article about Amazon comedy Catastrophe, Willa Paskin takes a detour to explore how TV has made “intentionally challenging” characters popular, citing shows like Girls and Curb Your Enthusiasm. She goes further, saying American TV has started to mirror British TV in its application of the “quasi-unbearable protagonist”: “Americans believe that things will get better. Brits laugh at how things stay the same.”

If you watched the first season of Hulu’s Difficult People, you saw a bit of Patsy and Edina’s sneer-inked bond and Alan Partridge’s fame-hungry vulnerability in lead characters Julie Kessler (Julie Klausner) and Billy Epstein (Billy Eichner). They’re two best friends who embrace that, often, things won’t get better—and laugh about it too.

Difficult People is the vision of Klausner, a New York City-based writer, performer, and podcaster who pokes fun at her past gig recapping TV shows in episode 1 of the new season. After encountering a recapper-turned-TV writer at the gym, she’s immediately consumed with jealousy over this “medium-talent Jewish bitch” as she schemes to get a job from famous showrunner Lilith Feigenbaum (Sandra Bernhard), only to have it blow up in her face as she inadvertently stands in front of a Nazi flag.

It’s a series about show business and the treadmill of new media fame, and the jokes come fast and narrow. There are two different jokes about Netflix shows, including a fake one called Horse, which prompts Billy to ask a question relevant to the streaming landscape: “When did comedies become 30-minute dramas?”

It’s a nod to the fact that Difficult People is the most niche example of niche TV. Elsewhere, Julie and Billy try to feel like they’re doing good by getting traction on social media with the “Toilet Hand Challenge.” After leading Nathan Lane into a public bathroom to film one, the three get into an argument about the stunt that doubles as a comment on fame.

“You put your hand in the toilet!” Lane huffs.

Each episode is a self-contained universe of pop-culture references and celebrity name drops, and there aren’t many running threads. This makes it easy to pick up and leave off anywhere in the season, but with season 2 we also have to see more character development. Billy more actively searches for a meaningful relationship while also taking advantage of Coming Out Day and losing his patience with a deaf love interest (Nyle DiMarco). Season 2 also debuts a trans character, Lola (Shakina Nayfack), a 9/11 conspiracy enthusiast who works at the coffee shop with Billy but does little more than swoop in with out-there theories. These side characters simply orbit Julie and Billy, and some of the cameos (Tina Fey as herself, John Mulaney as an “old timey” that Billy dates) feel like more could have been done with them, in the way that Curb Your Enthusiasm makes celebrity appearances more intrinsic to the storyline.

As with season 1, the show hinges on the friendship between Julie and Billy. Their schemes are hatched at the start of each episode and implode at the end, but at least they have each other. Going further into season 2, one wonders if things will get better for the duo or stay the same—or if we’ll see more of their inner lives. Or perhaps, in this era of niche TV, a show can run on jokes about Anne Hathaway’s clitoris.