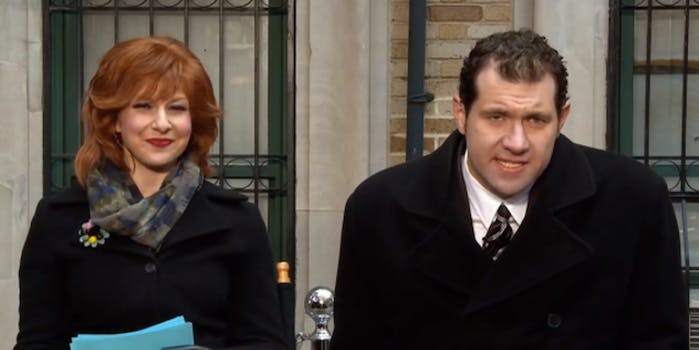 It's Christmas for Hulu.

When we spoke with Julie Klausner in June, she mentioned the Amy Poehler-produced show Difficult People, which had just landed a pilot. She said then it had been sold to USA Networks.

Today came news that the series, starring Klausner and Billy on the Street star Billy Eichner as best friends in NYC, would head to Hulu. The streaming site has recently started expanding its original comedy programming with shows like The Hotwives of Orlando and Jason Reitman’s Casual.

The fantastically named Beatrice Springborn, head of Hulu’s originals, posted a blog about the partnership:

When I first joined Hulu, I was excited to break new ground and continue to expand the offering of premium content that Hulu was built upon. Difficult People is one of those smart, distinctive comedy series that perfectly fits into our diverse slate of high-quality Hulu Originals.

The Internet rejoiced at this news.

.@julieklausner Julie, Difficult People was trending today at the same time as Charles Mansons wedding. This is literally ur dream come true

Production on the series is set to begin next early year.

H/T Hollywood Reporter | Screengrab via Billy on the Street/YouTube