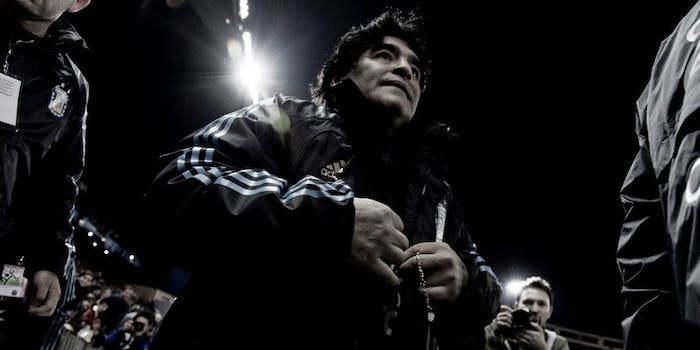 
The video, which Oliva secretly recorded on her cell phone, was first broadcast on an Argentine television station. Deadspin posted a translation of the video taken from Ciudad.com:

In the short clip, recorded by the young lady with her cell phone, you can see the coach in a very deteriorated state. Irascible, Diego is about as far as it is Rocío and reprimands her for using her cell phone. “Keep looking! Keep looking at your phone!” he begins. “Stop, loco, why can’t I look at my phone?” Oliva replies.

Maradona denies striking Oliva. According to a translation by the New York Daily News, he told journalist Marina Calabré, “Yes, I threw the phone, but I swear I have never raised my hand against a woman.”

According to Ciudad.com, Maradona and Oliva called off their engagement in June and have engaged in a media war since, with Oliva repeatedly accusing the soccer legend of domestic violence against her, and claiming to have evidence of it. The couple reconciled and was back together as recently as last week—as evidenced by this Twitter post of the two out on a date—but has evidently separated again.

The 53-year-old Maradona is considered by most to be one of the greatest soccer players ever, but this is not the first time he’s been filmed during a violent outburst. In August he was caught on tape slapping a journalist in the face, for allegedly winking at the mother of his child.