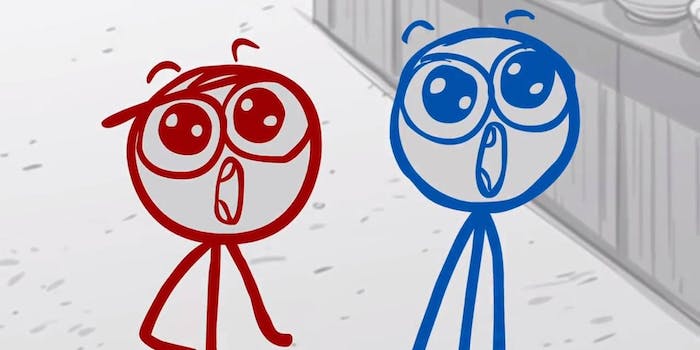 For anyone who’s ever drawn a stick figure, Dick Figures resonates. Slender and silly lead characters Red and Blue have been tearing up YouTube in 4 minute animated increments since November 2010, and the average episode of the animated webseries grabs several million views.

But all of that will change soon, because Dick Figures is going full-length.

On July 30, the official trailer for Dick Figures: The Movie dropped on YouTube. Racking up 100,000 views in just over a day, it’s just a small slice of the buzz surrounding the future animated feature.

Series creators and voice actors Ed Skudder and Zack Keller posted the project to Kickstarter in spring 2012 with a goal of $250,000 for a 30-minute movie. The campaign eventually earned more than $313,000, enough to meet the stretch goal of a 40-minute runtime.

Since reaching their funding goal, the duo have been posting “making-of” videos for the project, which originally had a tentative release of spring 2013. According to the trailer, the movie is actually slated for Sept. 17.

Though longtime fans might miss certain small details—like being able to see the backgrounds through the characters’ heads—classic cast members like Pink, the raccoon, and Lord Tourettes all appear in the trailer.

Most importantly, it seems the perpetual pals Red and Blue will be up to more of what they’re good at: crude bathroom humor, romantic melodrama, fights with crowds of ninjas, and senseless gore. At the very least, the movie looks NSFW enough to satisfy fans of the series.

To catch up on Dick Figures before the big release, start with this fan-made supercut “movie” of the whole series so far or visit the show’s cleverly named website, richardfigures.com.