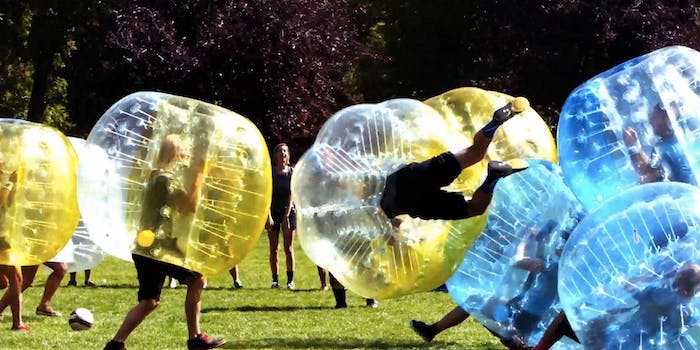 Who wouldn't want to slam into their friends at top speed in a giant bubble?

Imagine a game where you could charge your friends at top speed and bounce back without a scrape. That’s the world devinsupertramp created in his latest YouTube video featuring a crowd playing soccer in Zorb balls.

Zorb balls are like giant inflatable bubbles that protect you while still allowing you to see through and move in any direction; think hamster balls, but for humans. Devin “Supertramp” Graham, whose high-quality adventure videos often snag millions of views on YouTube, created the video, which combines fast and slow-motion shots that capture the full experience of a Zorb soccer game.

Like Graham’s other clips, this video is paid for by a corporate sponsor—this time Champion—but that doesn’t lessen their shine in the slightest. Graham’s videos are too fascinating and action-packed to ignore, from urban ziplining to an Assassin’s Creed-themed parkour course.