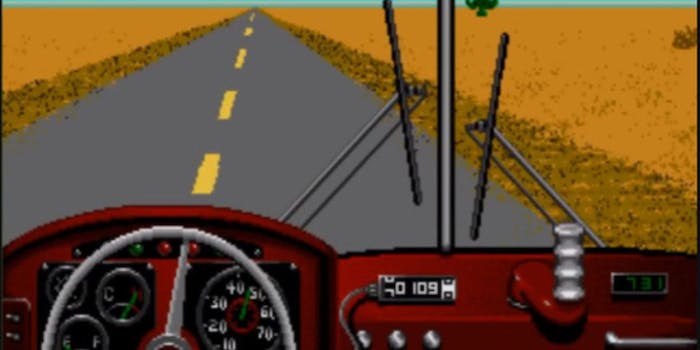 The most legendarily terrible video game ever is now thriving

Desert Bus puts you behind the driver's seat for a real-time, eight-hour commute from Arizona to Las Vegas. That's it.

Desert Bus was created by American illusionists Penn and Teller in 1995 for the Sega CD, devised as an intentionally bad video game that was to “work as a satire against the anti-video-game lobby” amidst the ’90s culture wars. It was never released.

But as a recently published New Yorker piece details, the game’s been given a rebirth from the ashes of its Clinton-era obscurity by way of Desert Bus For Hope, an annual charity event created in 2007 and centered around the game’s sole gameplay mechanic: Desert Bus puts you behind the driver’s seat for a real-time, eight-hour commute from Arizona to Las Vegas. That’s it. That’s the entire game. There is no pause button. One point is awarded for completing the trip.

Seems easy right? Well, for the most part it is, provided you have eight hours of free time. There are no passengers to accompany you during your commute nor any cars driving on the road alongside you. But as TNY’s Simon Parker explains, the game’s simplicity anticipates and foils all possibility for an easy cruise-control through any of the game’s 16-hour round-trip.

“Finishing a single leg of the trip requires considerable stamina and concentration in the face of arch boredom: the vehicle constantly lists to the right, so players cannot take their hands off the virtual wheel; swerving from the road will cause the bus’s engine to stall, forcing the player to be towed back to the beginning. The only scenery is the odd sand-pocked rock or road sign,” Parker writes.

While its 16-bit graphics are nothing near the photo-realism that big-budget, current-gen games strive for, by virtualizing the mundanity of driving alone, the distilled real-time gameplay in Desert Bus makes for something that’s more realistic than how the Call of Duty franchise approaches realism. What better way to illustrate a desolate desert drive than with fewer pixels? This is what the Smithsonian should’ve featured in its flubbed but well-intentioned The Art of Video Games exhibit, which despite not living up to its potential was nonetheless a big milestone for the video game industry.

Imagineering, the now-defunct New Jersey-based developer behind Desert Bus, created a game that’s a mishmash of the two polar-opposite worlds on today’s consoles. Indie games forgo fidelity and realism to create something artful and focused on gameplay, and blockbuster releases forgo innovating gameplay to focus on making a gun look photo-realistic—with the latter being the reason why, like movies, an effects-driven game almost immediately looks dated when its sequel is released.