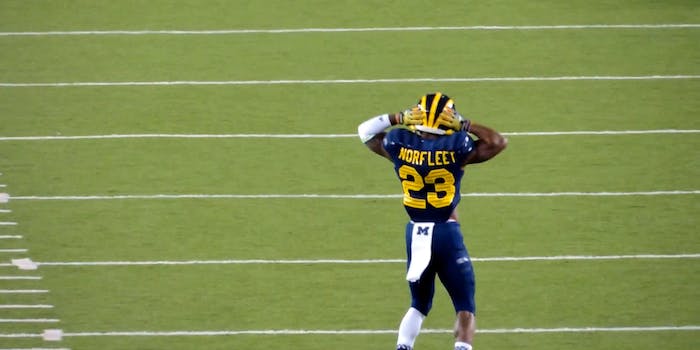 Moves so funky, George Clinton had to endorse them via Twitter.

There have been few bright spots for Michigan’s 3-4 football team. It’s tied for fifth-place in its division, the whole team seems to be injured, and fans are angry and calling for administrative scalps. Needless to say, the mood around Michigan Stadium has been somber as of late.

During a television timeout in the fourth quarter of Saturday’s 18-13 win over Penn State—just before a punt—George Clinton’s “Atomic Dog” was played over the PA system. Norfleet, who was back to field the kick, started “hopping” to the beat to the delight of the home crowd.

“Atomic Dog” is the unofficial theme song of the Omega Psi Phi fraternity—or the “Que Dogs” as they’re widely known—one that Norfleet is a member of. Whenever the song comes on, members perform “the Q hop.” It’s a form of step-dancing unique to the frat.

The fans in attendance weren’t the only one’s paying attention to Norfleet’s moves. The Prime Minister of Funk, himself, George Clinton, tweeted out his approval.

Michigan ended up getting a safety on that play. With results like that, maybe Norfleet just needs to bust his moves on every special teams play.