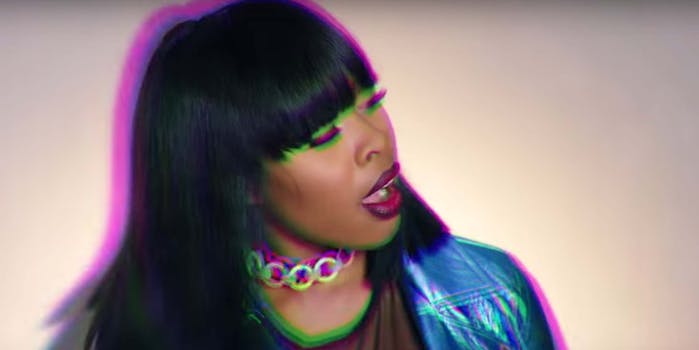 If Drake proved that the only way rappers can reign is to also make pop, Dej Loaf and Tink got next.

Something that has become increasingly evident in the wake of this whole Drake vs. Meek Mill imbroglio rap fans have been mired in for the past few weeks: Hip-hop needs more superstars.

Mill has appeared very out of his element in the mainstream spotlight despite having the No. 1 album in the country as recently as last month, and a widespread radio silence among other popular rappers concerning the beef has revealed the monopoly Drake holds on the genre. Rap music needs more than a single person with a legitimate claim to the top spot, even if they sing as much as they rap.

Atlanta has been the central hub of rap music for a hefty chunk of this century, but there are two artists from the Midwest who are rapping at the door of success. Dej Loaf of Detroit and Tink of Chicago have come to 2015 looking to make that jump as dynamic rappers, singers, and songwriters.

Establishment performers should work with them while they can still afford a feature.

Dej in particular may already be charging top dollar for her guest verses after last year’s sweet-but-slightly-psychopathic hit “Try Me” got her signed by Colombia Records. She’s since appeared on singles by Kid Ink, Lil Durk, and The Game. Unfortunately, on “Be Real,” the only one of those tracks to make it on the Billboard chart, she’s reduced to hook duty. But as Dej proves on her new EP #AndSeeThatsTheThing, she has so much more to offer.

The EP is Dej’s first solo project since last year’s Sell Sole mixtape, which was released right after she started garnering praise. She sounds much more confident here, defying haters with tales of her grind rather than merely promising and hoping for future success–delivering a myriad of emotions without ever getting louder than an inside voice. Winning has become a foregone conclusion with Dej. “But I ain’t even change, I just boss up and I made it” she raps on “Been on My Grind.” There are two features on the EP, but both–with Future and Big Sean—sound fragmented or at least leave much to be desired, like they were the best of what fell to the cutting room floor of studio sessions. Dej is better at taking over the world on her own anyway, like on “Desire,” showing her full rapping and singing range.

Tink has a similar star-quality with her feathery flows and highly relatable lyrics, but is yet to have her own breakout single. Last year’s “Don’t Tell Nobody” had every right to be a huge hit for people with complicated relationship statuses, but with the enigmatic singer Jeremih on the hook and no help from her record label, the song didn’t even get a proper release.

When Tink signed a deal with the legendary producer Timbaland last year, it seemed like the perfect type of mutually beneficial partnership. That still remains to be seen with Tink’s debut album scheduled for release next month, but thus far the collaborations have been underwhelming. The pair have come up with a bunch of Instagram posts of song snippets, and a couple ‘90s retreads “Ten Ratchet Commandments” and “Million,” the latter of which is getting some traction on regional radio.

However, both songs feel like a step back from “Don’t Tell Nobody,” which had a dizzy-bopping beat and featured Tink rapping in circles trying to untangle her heart. This is why her newest project, the third in her Winter’s Diary series, is so reassuring. Unlike the first two tapes in the series, Winter’s Diary 3 displays the entire spectrum of Tink, rather than mostly being a vehicle for her lighter singing. Timbaland only produces one song as Tink searches elsewhere for soundscapes, even using the Chicago drill producer, C Sick.

The Timbo song, “L.E.A.S.H.,” uses the producer’s patented “indian flute,” around which Tink performs the hardest bars on the tape, and C Sick lays out a feathery piano and skittering 808s for Tink to weave gorgeous melodies around on “I Like.” Another highlight is “Stripclub,”  an Auto-Tune-filled third-person narrative of a young exotic dancer. The closing track is a straight-faced ’80s synthpop song that could just as easily be done by Sheila E., but Tink owns it completely. Like Dej, her personal style is all her own but can fit into most any context.

If Nicki Minaj and Drake have proven that the only way a rapper can become a music superstar is to also make pop songs, Dej Loaf and Tink may very well have next.