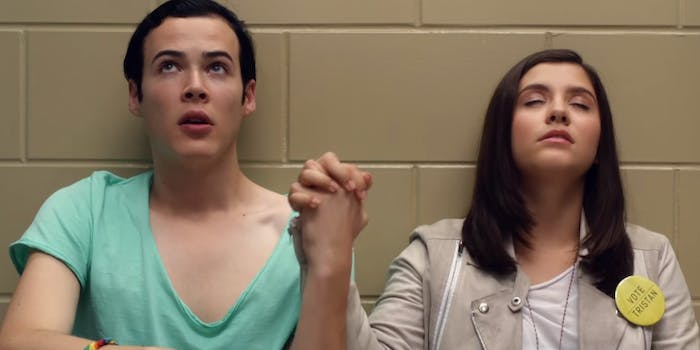 Netflix’s ‘Degrassi: Next Class’ retains its relevance for a new generation

Some things you can only learn from experience… or television.

When Netflix stepped in to save Degrassi: The Next Generation—after 14 years on TeenNick—there was speculation as to what the reboot would entail. Now that the show was released from under Nickelodeon’s protective wing and cast out into the hands of the on-demand generation, what would something so familiar have to do to stand out among the clutter?

The expectation was that, given the freedom of the format, somehow the Canadian teen drama would find a little more edge—which, when you think about it, is nonsense. Laugh all you want about the tropes of the afterschool special, but Degrassi has never been reticent in its portrayal of teen life. Whether it was drug use, suicide, gonorrhea, gender dysphoria, or pedophilia, nothing was taboo and all was delivered from a perspective neither judgmental nor patronizing.

And that’s almost the only complaint you could have of the various incarnations of the show: The challenges faced by the students are considered in such level-headed fashion as to possibly normalize them. So restrained is the music at critical points, so low-key is the dialogue compared to its U.S. equivalents that it is a standard reaction to reflect on one’s own teenage years and consider them lucky and free of drama.

So, has anything changed in Degrassi: Next Class? Well, for something that some sources have called a reboot, nowhere near as much as you’d expect. The episode names have shifted from song titles to #viralhashtags and apparently the classroom doors have had a lick of paint. There’s also the possibility that the camera lingers slightly longer in some of the raunchier scenes, but that would be difficult—and not to mention creepy—to evaluate.

Degrassi has always acted as something of a barometer for the smaller quirks of teen life.

But the structure of the series has been very much retained. Fourteen of the cast from the last season of The Next Generation return (“Snake” Simpson, once a student, now the principal), and so have their relationships and baggage. Wrinkles are still smoothed within the space of 24 minutes while deeper crevasses cross multiple episodes. It all results in a show that is able, almost uninterrupted, to keep on trucking, dealing with the issues that ail the contemporary youth.

So what is it that bothers the kids these days? While the comparatively shocking issues have monopolized viewer attention, Degrassi has always acted as something of a barometer for the smaller quirks of teen life. And it’s probably unsurprising that most of the same things that plagued the lives of kids in the ’80s—body changes, screwy relationships and just trying to fit in—remain.

Equally, it won’t be unexpected that all those things seem to have been amplified by technology. Fifteen-year-old girls worry that their “booty” isn’t as big as something they see online. Kids are worried about being catfished and getting their secrets posted all over. Others are filmed on phones doing stuff they may regret. You want to say it’s trivial and that it’s the sort of stuff that will go away in time without leaving any residual mark, but that’s not really the truth, is it?

So as unfashionable as Degrassi can sometimes appear—the shout-out to alumnus Drake in the opening moments of the first episode is a lame cry for credence—and being borne of a medium that will now, always, be slightly behind the current Internet chatter, it retains its relevance.

Because no matter how well meaning the responsible adults are, no matter how many sex education classes are scheduled or how many office doors are open “if you ever need to talk,” there are just some things you can only learn from experience… or television.