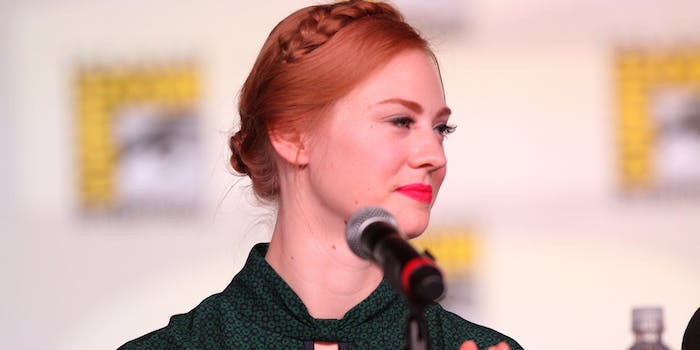 Deborah Ann Woll will play opposite Charlie Cox in the Netflix series.

Deborah Ann Woll has a new role to sink her teeth into. The True Blood star has been cast as the female lead in Marvel’s new Daredevil series.

In addition to Woll and Cox, the new Daredevil series is also set to star Elden Henson (The Hunger Games: Mockingjay) as Foggy, Murdock’s friend and legal partner, Vincent D’Onofrio (Men in Black) as crime lord Kingpin, and Rosario Dawson (Sin City) in an unspecified role.

Daredevil marks Marvel’s third TV venture. Agents of S.H.E.I.L.D was recently renewed for a second season and Agent Carter starring Captain America’s Hayley Atwell will debut midseason for ABC. Daredevil is also part of a multiyear deal between Netflix and Disney that will bring three other Marvel superheroes to the streaming site. Jessica Jones, Iron Fist, and Luke “Power Man” Cage will also be getting their own  shows. The four serialized storylines will culminate in an Avengers-esque team-up for  a miniseries called The Defenders.

Woll, Marvel, and Netflix have not commented on the casting.