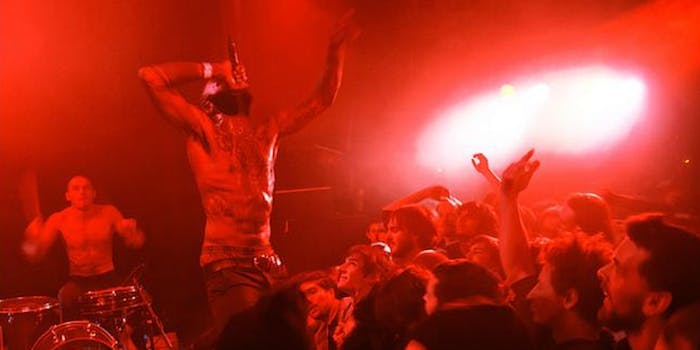 Death Grips found a fanbase that was raised by the Internet.

California noise-rap group Death Grips gave the Internet a quiet surprise on Sunday night, amongst chatter about the Tonys and Game of Thrones. The eight-song playlist for new album N***as on the Moon is up on YouTube, Facebook, and Soundcloud.

It’s apparently the first half of a double album to be released later this year on the band’s own label, and the surprise release is sweetened by the appearance of Björk on all eight tracks, though it’s not entirely clear what her contributions are. You can definitely hear her vocals on “Up My Sleeves.” However, it’s not a left-field move: She collaborated with the group for Bibliophilia remixes.

The Death Grips sound is difficult to express or define. Some have tried:

That’s a good description, though. Death Grips seem to have found a younger fanbase that was raised by the Internet. They’ve become one of the most sampled bands on Soundcloud, where fans have ripped apart their songs for their own creations. Listening to the songs off N***as on the Moon, it’s easy to see why they’re so appealing to producers and DJs.

Death Grips’ career trajectory is as fascinating as their music. Their last two albums, 2013’s Government Plates and 2012’s NO LOVE DEEP WEB, were both given away free online, and the self-release of the latter album got them dropped from Epic Records. Angel Haze pulled a similar punch last December.

In an official statement on Death Grips’ release from their roster, Epic explained they had no room for online shenanigans:

“Unfortunately, when marketing and publicity stunts trump the actual music, we must remind ourselves of our core values.”