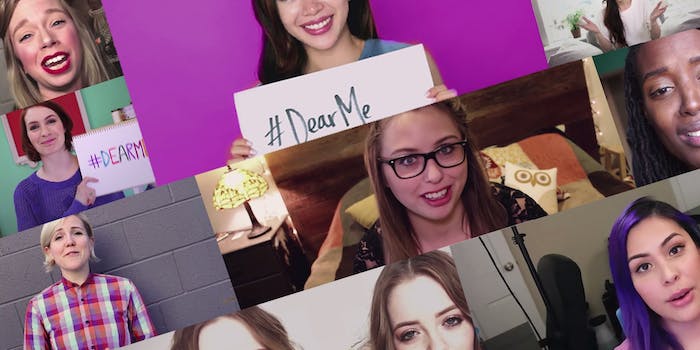 In celebration of International Women's Day, the women of YouTube speak out.

Many people use YouTube to find inspiration, but the Google-owned video service wants you to know that the best advice comes from yourself. That’s why the company launched the #DearMe campaign, in which the women of YouTube share words of encouragement for their younger selves in an attempt to inspire the next generation.

The campaign, which celebrates International Women’s Day, tapped YouTube stars like Grace Helbig, Michelle Phan, Felicia Day, Hannah Hart, Lindsey Stirling, IISuperWomanII, and Bunny Meyers. Each woman shared a personal message to her younger self and called on young women to listen to themselves instead of the negativity around them.

The campaign asks other women to upload their own #DearMe letter to YouTube. The hashtag already trended on Twitter on the first day it launched, with people sharing advice to themselves in 140 characters or less.

#Dearme, stop trying to be normal. No one is normal. If you were normal you'd wish you weren't. It isn't a useful goal.

In addition to posting videos, YouTube is encouraging people to respond in any way they wish—including by uploading GIFs to the site’s official Tumblr.