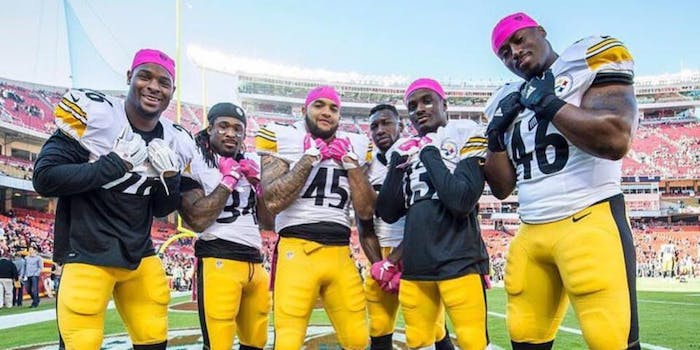 The NFL can't fine them.

Breast Cancer Awareness Month is over, but Pittsburgh Steelers running back DeAngelo Williams will have his mission of spreading awareness fulfilled thanks to his two daughters.

Williams was fined $5,787 by the NFL last week for wearing “Find the Cure” eye black. The gesture, for which Williams was essentially fined for raising breast cancer awareness during Breast Cancer Awareness Month, outraged fans just as news got out that Steelers cornerback William Gay was also fined $5,787 for violating the NFL’s uniform policy with purple cleats in honor of his mother.

October is over and Williams has to go back to the Steelers’s usual uniforms, but his daughters don’t. A photo from Adam Schefter showed Williams’s two daughters wearing pink in solidarity (along with shirts donning Williams’s number, 34) in honor of breast cancer awareness since their father wasn’t able to do so.

After all, as they point out, “The NFL Cannot Fine Us!”

NFL declined DeAngelo Williams' request to wear pink beyond October, but his daughters having none of it. pic.twitter.com/u3FVs0Gn5q

Breast cancer is a cause near to Williams, who lost his mother and four aunts to the disease. He was one of the most visible advocates for pushing breast cancer awareness in the NFL during its Crucial Catch campaign—which, according to reports, doesn’t actually raise money for cancer research—and his own foundation provides free mammograms for women every year.

“Breast cancer, whether I like it or not, is part of my family’s story,” he wrote in Sports Illustrated last year. “That’s why I am so passionate about raising awareness, because I have seen firsthand how it can impact others.”

This is dedicated to my mom, my aunts & women everywhere affected by Breast Cancer. I love you. #WeAreInThisTogetherhttps://t.co/bAwaanlfzV

I just want to elaborate on the "53 mammograms I’m paying for” because there's much more to it… pic.twitter.com/ehu0zQ1nDt

Williams wants to raise awareness every month, not just October, but his efforts to do so have received pushback from the NFL. He made headlines last month after ESPN’s Lisa Salters reported that Williams asked the NFL if he could wear pink beyond October and it denied his request because its strict uniform policy prohibits players from displaying personal messages. Williams instead dyed pink streaks in his hair.

Although some fans offered to pay his fines so he could continue wearing pink, Williams indicated that he’d adhere to the NFL’s uniform policies in the future. But people were quick to point out the hypocrisy of the uniform policy.

"We will find a cure" and the breast cancer ribbon were printed on DeAngelo Williams' eyeblack this month. The NFL just fined him $5757

DeAngelo Williams, one of the NFL's best advocates in raising funds for breast cancer research, has worn this eyeblack all October