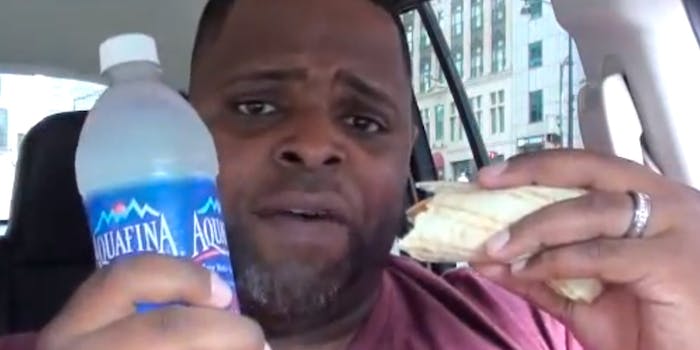 Oh my dayum! Daym Drops is back with another Super Official food review. This time, he's taking on Quiznos' Honey Bourbon Chicken Wrap.

This is the first day of the rest of Daymon Patterson’s life. Daym Drops’ Super Official food reviews have officially gone healthy.

“It’s about 259 calories or so,” he notes. “Real light, real easy on the stomach piece. Real make-ya-hungry-because-this-is-how-big-it-is.”

It’s a far stretch from a mean cheeseburger, but Patterson’s determined to “do it right.”

The pita wrap itself, small enough for “his whole hand piece” to swallow up, brings about a brief bout with depression, but Patterson remains unfettered, opening the wrap to take a look at the spices.

“It looks mean, don’t it, baby?” he asks. “It looks real mean. It looks real tempting. You can probably count the pieces of chicken in here, but that’s okay.”

What’s the Super Official review? Why, you’ll just have to watch.