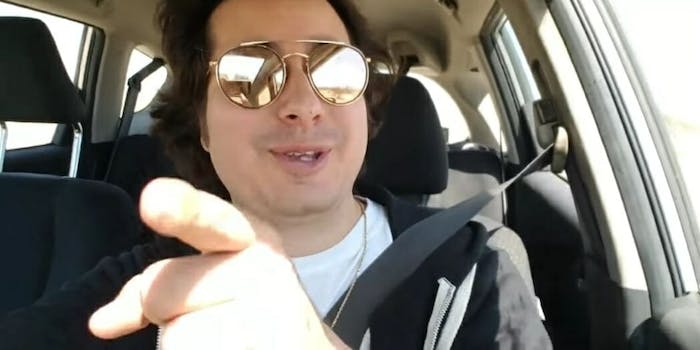 A YouTuber who was livestreaming himself while driving on Thursday was involved in what sounded like a terrible car crash, and the internet is frantic to find out what happened.

YouTuber lameduckg, aka David Slavitt, streamed himself in a video titled, “Leaving movie set [LIVE IRL VLOG],” and it abruptly ended as he apparently was involved in a serious auto accident in the town of Llano, California.

Antelope Valley Hospital confirmed to the Daily Dot on Friday that Slavitt was a patient there but would not give out details of his condition.

The entire 45-minute stream is here.

In the last few seconds of the video, he’s talking about his desire to get off a dirt road. Then, he screams, “Oh, God!” before the sounds of a horrific collision are heard and the stream is abruptly cut off.

The internet has since speculated about what happened and if Slavitt was still alive.

Multiple calls by the Daily Dot on Friday to the California Highway Patrol office that serves that area of the state have gone unanswered, so it’s unclear what officers discovered at the scene of the accident.

But one redditor noticed the reflection of a semi-truck in Slavitt’s sunglasses to his left just before the collision.

Slavitt often posts IRL streams where he records himself on his phone living his life, walking on the streets of Los Angeles, reading YouTube user comments, watching motivational videos, exploring Hollywood Boulevard, and getting kicked out of bars for wearing a President Donald Trump hat.

Slavitt said earlier in the clip that he was leaving a movie set after a day of acting somewhere “in the fucking desert.” Forty-five minutes later, he was in the collision, and he reportedly had to be airlifted to the hospital.

This story will be updated with additional information if it becomes available.