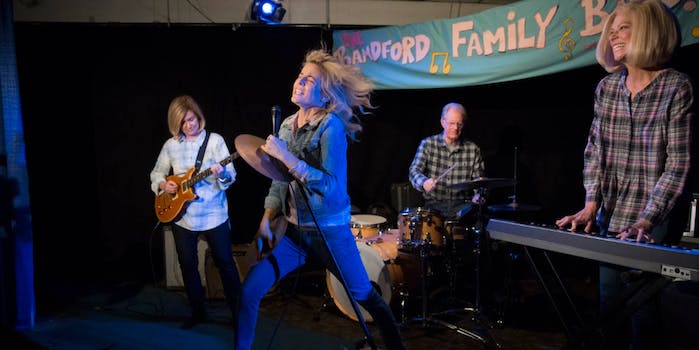 Composer David Schwartz on creating the sound of ‘Lady Dynamite’

Of course 'We Are the World' inspired a song.

The recurring outro to Lady Dynamite is the perfect curtain-closer: There’s a drum roll, then a swell of chorus sweetly sings, “I don’t know what I’m doing, more than half of the time.”

Who would have thought a Dean Martin song from 1972 would translate so brilliantly to a 2016 Netflix show about mental health and show biz starring comedian Maria Bamford? David Schwartz, the show’s composer.

Schwartz says he’s a “kitchen sink guy,” and approached the series’ soundtrack with that mindset. The opening track, which Schwartz explains was influenced a bit by Japanese hip-hop, matches the manic brightness of the show, introducing us to Bamford as she kicks and improvises over a “wacky, big band” skronk. Schwartz says the idea to improvise came from creator Mitch Hurwitz.

In adding stuff and stuff and stuff, the hope is to try to give the show a more distinctive sound based on original songs, like Schwartz did for another Hurwitz joint, Arrested Development. He’s responsible for its ukulele opening and the interstitial music, which became as much a part of the show as the characters. While there was some “carryover” of sounds from that show to Lady Dynamite, as Arrested Development grew, it developed that signature sound.

“That’s what you’re trying for,” he says.

We asked Schwartz about a few more of Lady Dynamite‘s songs and how they came about.

The human-dog duet from ‘Knife Feelings’

That is actually a Gordon Lightfoot song, repurposed for a touching duet between Bamford and her Herzogian pug, Bert. “It’s a very winding, hard song to sing,” Schwartz says.

‘You Gotta Loaf’ from ‘Loaf Coach’

Bamford goes to a “loaf coach” (played by Jason Mantzoukas) to learn how to do less, and this song becomes the anthem for doing nothing. It was originally to be sung as heavy metal, and singer Julian Coryell (son of guitarist Larry Coryell) delivered it with a “high, metal, screeching voice.” Then Schwartz thought it would be funnier if he sung it like Perry Como, so it actually comes off a bit Euro-goth.

The lyrics were written by the show’s writers. “It’s sort of Dylan-esque when you have people who write TV and they get to write song,” Schwartz says. Sample lyrics: “You’ve got to loaf/You’ve got to loaf/Cause working is for pussies and trying is for chumps.”

The ‘Touch the Children’ song from ‘Josue’

Bamford gets roped into a gig for the unfortunately named foundation Touch the Children and bombs, and this song brings us screeching into the end credits. Schwartz says he wrote it with his 26-year-old daughter, Lucy, who was “aghast at the concept of the song.” He ran it by showrunner Pam Brady to see if it went too far, and she advised him to “go as far as you can.” He modeled it after “We Are the World” and its big production of “heroic chords.”