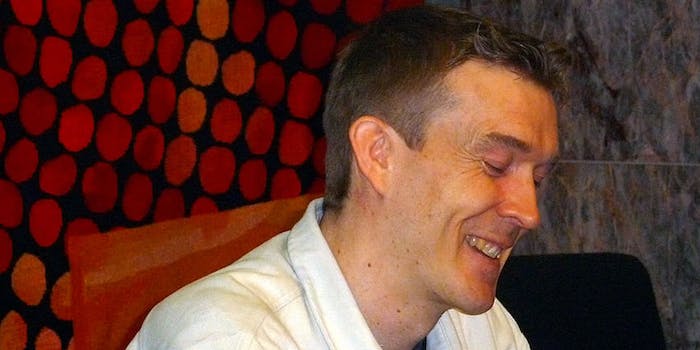 He joins Jennifer Egan, Neil Gaiman, Teju Cole, and other high-profile novelists in experimenting off the page.

David Mitchell, the celebrated British novelist who gave us Cloud Atlas and The Thousand Autumns of Jacob de Zoet, has a new book coming out in September: The Bone Clocks. But as highly regarded as he is, even Mitchell is not immune to the literary industry’s demand for social media promotion. In April, he grudgingly opened a Twitter account.

Still, Mitchell is big-time enough that his publisher manages the feed on his behalf: “I’m not really a social media animal,” he told the BBC in explaining his resistance to the popular platform. “I like my privacy … I don’t want to make public the ante-rooms of my mind. I don’t want to add to this ocean of trivia and irrelevance, it’s already vast and deep enough.”

As a way of avoiding that fate and riling fans up ahead of the The Bone Clocks’ release, Mitchell will forgo the usual half-baked status updates in favor of a serialized short story, “The Right Sort.” The 1978-set fiction, which opened today and will last a week, follows a teenage boy who has discovered the pleasures of Valium, relaying his consciousness in “a sequence of nice little throbs and pulses”—or 280 tweets:

‘I thought lying was wrong,’ I say. Butter wouldn’t melt in my mouth. Mum gives me a look. ‘It’s called “creating the right impression”.’

A lorry rumbles by. ‘Besides,’ adds Mum, ‘if your *father* paid what the judge told him to pay, on time, we would travel more by taxi.’

Westwood Road’s not a run-down road, but it’s hardly posh either. Joined-up red-brick houses, like ours. Small drives. Dustbins.

Not like you’d expect a Lady to live in. ‘Right,’ says Mum, double-checking the directions she wrote on an envelope. ‘This way.’

‘So we’re looking out for an alley called “Slade Alley”,’ says Mum. ‘On the left. And mind the puddles.’ Off we trudge.

It’s a grey afternoon. Rain’s forecast for later. Through a front window, I see wrestling on the telly. Mum walks ahead. I follow.

I hope to God nobody from school sees me in this tweed jacket and tie Mum bought me from Littlewoods. I look like a total ponce.

If any of Gaz Townshend’s lot catch me dressed like this, life won’t be worth living come Monday. His gang shits on me enough as it is.

It’s all very well for Mum to say, ‘You shouldn’t care what people think’: kids have laws and if you break those laws, you’re dead meat.

Mitchell has said that one needn’t read The Bone Clocks to understand “The Right Sort,” or vice versa, but that the two coexist “in the same universe where possibly the clause of mortality that is written into the contract of life is negotiable.” Sounds like exactly the sort of metaphysical stakes we’ve come to expect from this wildly inventive talent. Read on!

The pill’s just kicking in now. Valium breaks down the world into bite-sized sentences. Like this one. All lined up. Munch-munch.

Author @david_mitchell is tweeting his new short story. He explained why to @BBCR4Today: https://t.co/a5tX2Q8icj