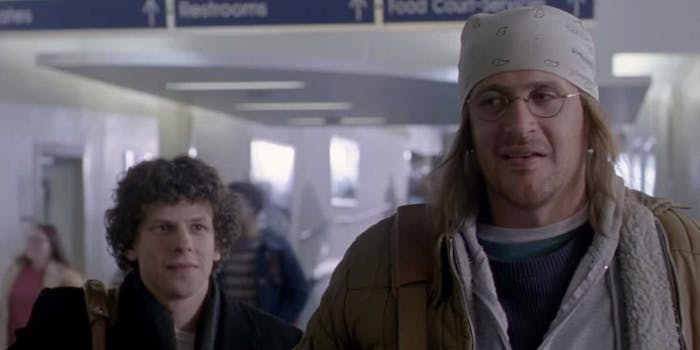 I didn’t know the beloved late writer David Foster Wallace, but I’ve read enough of his work to suspect that he’d cringe at the idea of a movie based on his persona. After you watch the trailer below, you probably will too.

The Internet knows Wallace as the source of an overquoted graduation speech, the zero point for viral literary hoaxes, and the author of Infinite Jest, an unwieldy tome whose title serves as a glaring red flag on any online dating profile. (Seriously, do not engage these people.) Anyway, we’ll soon see a whole new side of him, courtesy of Jason Segel: clinically depressive pixie dream boy out on an interminable book tour. His foil is Jesse Eisenberg, relegated once more to the role of twitchy insecure dude, in this case David Lipsky, whose biographical account of the trip, Although of Course You End Up Becoming Yourself, is the basis of The End of the Tour.

Two intellectual white dudes talking in endless circles about the nature of art, life, and selfhood while tooling around a crappy sedan? Sounds like the gritty reboot of My Dinner With Andre that nobody asked for.