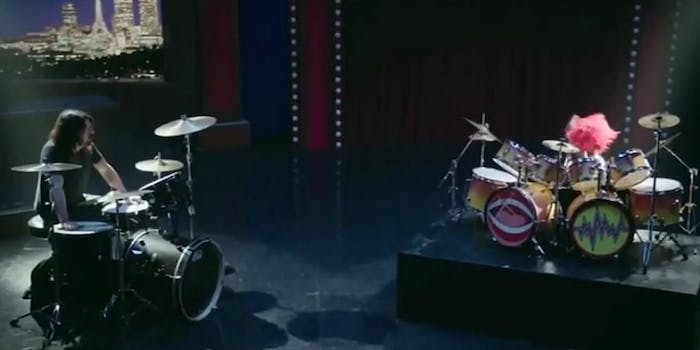 How will Grohl match up against Animal's experience?

There’s little doubt that Foo Fighters frontman Dave Grohl is a master of creating viral moments. Some of these moments are organic—or, at the very least, they appear that way—but other times, Grohl is paired with another culturally popular being in the hopes that TV ratings will increase and Internet pageviews will explode.

That, I suppose, is why we’ve received this digital gift of a drum battle between Grohl and Animal from the Muppets.

In reality, this isn’t much of a contest. Despite Animal’s experience advantage, he can’t match Grohl’s chops. Even though Grohl admits at the end that Animal bested him, we all know this is a lie. Grohl won the contest—and rather easily. Perhaps for his next test, Grohl should take on the 5-year-old girl who recently pounded through a System of a Down cover.

The duel between Grohl and Animal was fine—neither great nor innovative but also not terrible. But I was thinking that another Muppet should have been given the chance. How about for an encore, Grohl challenges the criminally underrated Scooter?