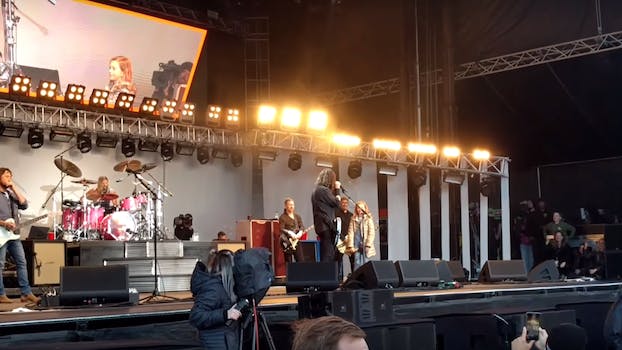 She keeps the beat.

As memorable Father’s Day moments go, it doesn’t get much better than this. Foo Fighters frontman Dave Grohl welcomed his daughter Harper on stage at a concert in Reykjavik, Iceland to play the drums, and the 8-year-old knocked out a rendition of Queen’s “We Will Rock You” in front of thousands of adoring, chanting fans.

While Harper’s guest appearance was initially played as a surprise to the 48-year-old rocker, it quickly became clear it was all part of the plan. Grohl hasn’t been shy in recent years about discussing his life as a rock star father, and being a parent is clearly something he takes both pride and pleasure in. While he initially pretended to be surprised that the young girl shared his last name, Grohl quickly fessed up and explained to the audience that she was the “next generation.”

“About two weeks ago, my daughter said, ‘Daddy, I want to play the drums,'” Dave Grohl told the crowd. “And I said ‘OK, you want me to teach you?’ And she said, ‘Yes.’ And then I said, ‘Do you want to get up in front of 20,000 people in Iceland and play?’ And she said, ‘Yes.’ So ladies and gentlemen, welcome the next generation. There’s another Grohl on the drum set now.”

But even so, welcoming an 8-year-old girl on stage at the Secret Solstice Festival is a feat of awesome fathering that few people can make happen. Obviously, the Father’s Day tradition is typically for the kid to give a heartfelt gift to the dad, but this time, the dad turned the tables in an absolutely delightful way.