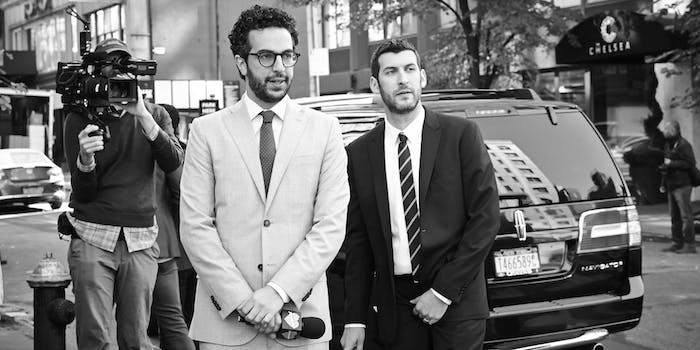 If you see these men coming for you, run.

Seeso, NBCUniversal’s new subscription-based streaming comedy goldmine, has a wealth of classic and syndicated shows to unload on viewers, but it’s really betting on new original series to draw in fans. Can it win viewers over with an awkward dating show?

Ethan Fixell and Dave Ahdoot are the hosts of Seeso’s Dave & Ethan: Lovemakers, a 20-minute sprint through random matchmaking on the streets of NYC. It’s a little like Billy on the Street, except there’s less yelling and no obstacle courses. Well, at least not physical ones.

They pluck one man or woman off the street, pair them three contestants, and the awkwardness begins. Fixell typically plays the straight man, the anchor offering support to the bachelor or bachelorette participating, while Ahdoot floats around the three contestants and makes weird or inappropriate jokes when needed.

The show was modeled after classic TV dating shows, but they weren’t just trying to parody them. There’s also the matter of technology, and the flood of dating apps that can now potentially find you love (or at least a poorly lit dick pic). Fixell is married, but Ahdoot says he uses “all the dating apps.” In conversation, the two are a lot like their Lovemakers personas.

“I use the dating apps vicariously through Dave,” Fixell said. “I genuinely do enjoy watching him swipe and being like, ‘No no no, this one.’ Or fighting him on which ones he should or shouldn’t swipe.”

“He screenshots ones that he likes, and then sends them to himself, and then just looks at them longingly,” Ahdoot added.

“Sometimes I print out the photos that I’ve screenshotted,” Fixell said, “and I place them strategically throughout my house. And I look at them longingly whenever my wife starts to nag me.”

“Are you single?” Ahdoot casually asked me. “What’s your status?”

The show evolved from Fixell and Ahdoot’s YouTube channel, which is a mix of musical comedy and pickup stunts. As early pioneers in the field of pickup videos, I asked them to explain what the heck caused the genre to devolve into such a creepy mess.

“It’s like what happens in any cultural phenomenon,” Fixell said. “Something is underground and then it becomes kind of imitated again and again, and people have to keep raising the stakes, and because you’re raising the stakes to outdo the creators before you, whether it’s heavy metal or art or videos, you have to keep getting crazier and crazier. And a lot of times, these videos are fake or staged or mean-spirited. And that’s something we’ve never done. All of our videos, whenever we pick somebody up or do something that’s funny, it’s always at our own expense.”

Comedy site Above Average, which produced the Seeso show, developed a webseries for them a little over a year ago, called Dave & Ethan’s Dating Game. Ahdoot says the format comes from having played more than 300 colleges and trying to engage with an audience.

When it was brought to NBCU, however, it was Executive VP of Digital Enterprises Evan Shapiro who suggested they “incorporate some of the other types of stuff we work on,” Fixell explained. “The hidden camera stuff, the man-on-the-street stuff, some of the sketches we had worked on before. And incorporate new material in between the dating game segments.”

The format doesn’t always work; the questions are often clunky, the answers not very revelatory. Ahdoot and Fixell have great chemistry, but we don’t necessarily feel that from the contestants. Lovemakers is still warming up.

On Jan. 7, the day Seeso debuted, the site apparently performed three times better than expected, thanks in part to a savvy multiplatform marketing campaign that included Fixell and Ahdoot in several promotional spots highlighting the site’s “secret society” approach to comedy.

In addition to Lovemakers, Seeso is also set to debut new shows from Dan Harmon, Jonah Ray, Wyatt Cenac, Cameron Esposito, and another Above Average show, Thingstarter, about failed Kickstarters. Several original shows focus on niche ideas or concepts, but Lovemakers is hoping to zero in on real-life experience and interaction, not so much the psychological beatdown of dating apps.

“It’s almost like Tinder has become a game almost,” Ahdoot said. “It’s as much about matching as seeing how many girls would match with them. There’s people who have 200 matches and have gone on two dates in the last few months, because it’s just literally become a game.”

“I think dating in general has become so much about appearance because of what Dave is talking about,” Fixell said. “I know people who literally look at a photo and say no immediately—snap judgement—and then they’ve ruled that person out for eternity. Part of what we try to do at colleges is also just break these barriers down. I think apps have a place, but it’s also good to be able to walk up to a stranger you meet in real life and say, ‘What’s up?’

“That’s also what our show is about, even though it’s a comedic show. It’s a comedy show first, but it’s also about breaking down social norms, and making it OK to fail and OK to put yourself out there, which is something apps don’t allow us to do these days.”