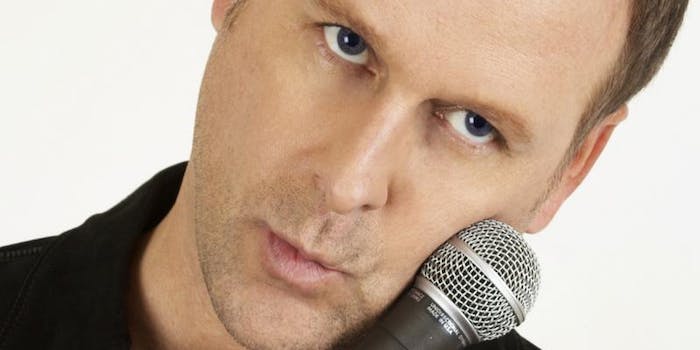 Would he ever date John Stamos? What would happen if Taylor Swift wrote an angry song about him? What happened to Full House puppet Mr. Woodchuck?

Dave Coulier is one clean guy. Not just because of the gardeners meticulously fixing up his lawn behind us during this interview, but because he’s launching his big Clean Guys of Comedy Tour concert film in theaters nationwide on Sept. 19.

Coulier is best known for playing the goofy Joey on ABC’s classic sitcom Full House, a show that brings a twinkle of nostalgia to any ’90s kid’s eye. He is also an avid Twitterer with more than 214,000 followers and has been on a publicity tear, promoting CleanGuysOfComedy.com all over the place.

The Daily Dot’s Gaby Dunn visited Coulier’s Los Angeles home to find out if he’d ever date John Stamos, what would happen if Taylor Swift wrote an angry song about him, and the sad, murderous fate of his Full House puppet, Mr. Woodchuck. Coulier said his tour, which includes comics Jamie Kennedy and Heather McDonald, is capitalizing on the built-in cross-generational audience he has from Full House.

“‘Clean’ has this tone to it that it’s dumbed down or it’s not hip or it’s not as funny, and if you look at the biggest touring comedians today, they’re clean. They’re selling out arenas,” he told the Dot. “Comedy has a lot of different flavors for different genres and different audiences. I’m just creating an alternative for people if you want to go out with your boss, your wife, your teenage kid; this is for you.”

Get tickets for Coulier’s film here, and enjoy the awkward interview above. RIP Mr. Woodchuck.

Photo via Clean Guys Of Comedy