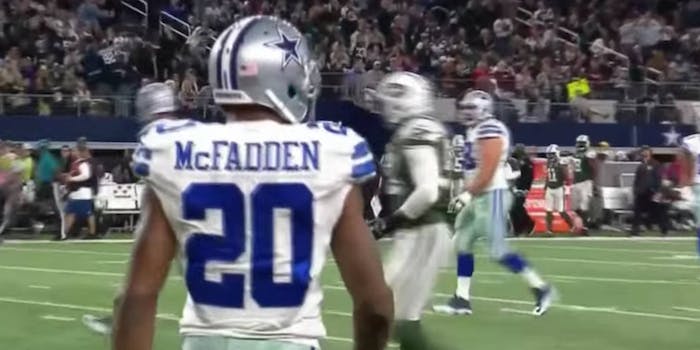 McFadden is seeking $15 million in damages.

Dallas Cowboys running back Darren McFadden had made nearly $50 million during the course of his NFL career—an impressive amount of money that the two-time Heisman Trophy runner-up was hoping to stretch far beyond his tenure on the football field.

Not all of that money may be coming to McFadden, however. According to the NFL player, his longtime business manager and family friend may have cost him heavily. That’s why McFadden’s suing him to the tune of $15 million.

The unfortunately named Michael Vick (no, not the dog-fighting quarterback) allegedly lost $3 million of McFadden’s fortune in a Bitcoin investment gone wrong, misappropriated funds, and even attempted to sell the running back’s property that had been allegedly purchased with the hard-earned cash of his client.

Vick allegedly accomplished all of this by convincing McFadden that it was in his best interest to grant the money-manager power of attorney, and according to the lawsuit, Vick used fraudulent documents to gain it. McFadden told the Associated Press that he learned of the fraud when Vick allegedly tried to sell a building to McFadden that Vick had bought using McFadden’s own money.

According to the AP, Vick is just one of 11 plaintiffs on the receiving end of the lawsuit. Vick is the only defendant without the anonymous moniker of “Doe,” however.

It’s unclear when McFadden and Vick will see each other in court. If proceedings occur in the middle of the NFL season, McFadden would be forced to fly to Little Rock to appear in person, as he’s filed the suit at the federal court in Arkansas’s capital city.