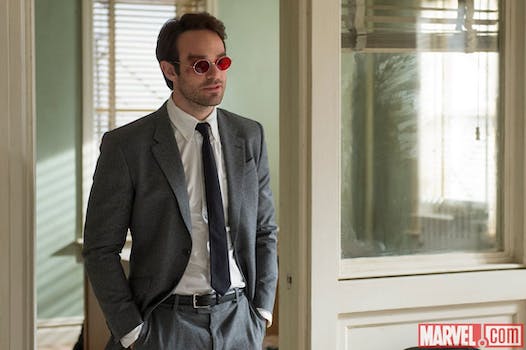 Will this version be better than the Ben Affleck movie? Who are we kidding. Of course it will.

The first trailer for Marvel’s Daredevil is here, and it looks pretty action-packed.

The upcoming Netflix series is a reboot of the superhero’s origin story, with no relation to the 2003 movie starring Ben Affleck. Starring Charlie Cox as New York lawyer Matt Murdock (aka Daredevil), this series is the first example of a classic street-level crime-fighting drama from Marvel Studios. Thanks to its Netflix format and showrunner Steven S. DeKnight (Spartacus), we suspect Daredevil may be tougher and more mature than other efforts in the franchise, and its blood-spattered trailer supports that theory.

Marvel is positioning Daredevil as a crime drama rather than a superhero show, with showrunner DeKnight describing it as “gritty” and comparing it to things like The Wire and Taxi Driver. They’re even steering clear of showing us Daredevil’s traditional costume, with the trailer and the promotional photos depicting Cox in a black outfit and mask. Though that’s kind of understandable, given the lingering derision surrounding Ben Affleck’s red pleather catsuit.

Daredevil is the first of five Marvel/Netflix series set in New York’s Hell’s Kitchen, with 13 one-hour episodes debuting on April 10. That gives you just under a month to watch the entire show before Avengers: Age of Ultron comes out, although let’s face it, most people will be binge-watching the whole thing in one weekend.