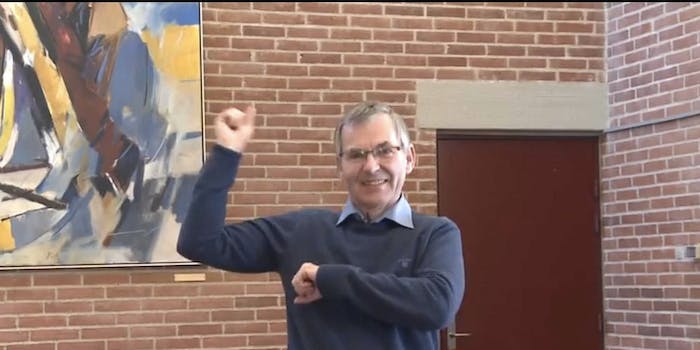 Danish mayors may have to pay for awkward “Gangnam Style” parody

They're not the first Scandinavian mayors to awkwardly parody Gangnam Style, but they're the first to be sued for it.

Mayors of the world, beware: Even though it’s 2013, your Gangnam style parody video is going to cost you.

As noted by TorrentFreak, the discrepancy between this parody and the hundreds of thousands still on YouTube seems to come from the fact that the four mayors used the original Psy audio.

Plus, Universal thinks the parody could count as a campaign video. Dennis Ploug, a consultant with the company, told a local paper that the seemingly high price for using the song is the amount Universal would have charged had the mayors asked for permission in the first place.

Ploug added that Universal is well aware that the four mayors didn’t deliberately set out to violate copyright, and that its fine is actually low. If they don’t settle by Friday, he said, the amount doubles.

It’s unclear who, if anyone, is going to pay up. The mayors say they the video was intended to promote entrepreneurship in their region, and a local company was responsible for putting in the song.

In response to infringement claims, the video’s creators have re-uploaded it. But they’ve replaced the audio with jarring applause and a salsa track, resulting in a surreal, disturbing clip that unlikely to contribute to anyone’s election.

This is not the first time that a group of Scandinavian mayors has gathered together to create an awkward Gangnam Style YouTube parody. One from September, in which the participants seem to be celebrating a new road, is still available on YouTube—they provided their own vocals.

CORRECTION: This article originally stated that the mayors in question were Norwegian. They are Danish.