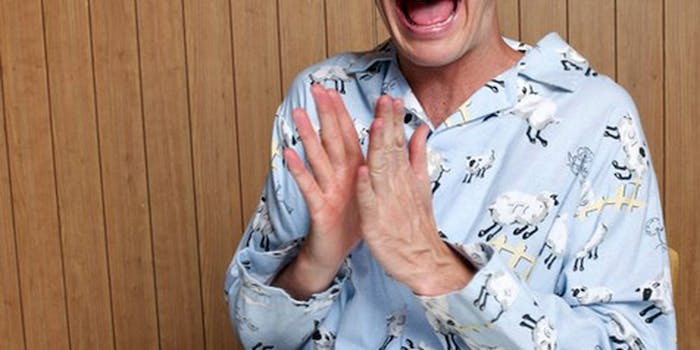 An anonymous Tumblr user claims the comedian made a joke about rape at an audience member's expense.

Daniel Tosh is Tumblr’s public enemy number one after an anonymous post declared him an advocate of rape jokes. But the comedian says his joke was “taken out of context,” and some of comedy’s biggest names are turning out in support.

According to an anonymous Tumblr report of “something that happened to a friend of mine her in her own words,” Tosh, a prominent comedian who makes fun of YouTube videos on Comedy Central’s Tosh.0, took the stage at Los Angeles’s Laugh Factory Friday night and launched into a bit about rape jokes.

The anonymous audience member was not impressed:

So Tosh then starts making some very generalizing, declarative statements about rape jokes always being funny, how can a rape joke not be funny, rape is hilarious, etc. I don’t know why he was so repetitive about it but I felt provoked because I, for one, DON’T find them funny and never have. So I didn’t appreciate Daniel Tosh (or anyone!) telling me I should find them funny. So I yelled out, “Actually, rape jokes are never funny!”

I did it because, even though being “disruptive” is against my nature, I felt that sitting there and saying nothing, or leaving quietly, would have been against my values as a person and as a woman. I don’t sit there while someone tells me how I should feel about something as profound and damaging as rape.

She said that Tosh paused for a moment before saying “Wouldn’t it be funny if that girl got raped by like, 5 guys right now?” before she left the club in haste, filing a complaint at the front desk on her way out the door.

Posted on Tumblr Tuesday, her story has already received over 20,000 notes and has caused quite a stir online. According to Topsy, a social media analytics tool, nearly 7,000 tweets have been posted with the words “Daniel Tosh” in the past 24 hours. To put that number into comparison, the comedian has received only 11,000 mentions total in the past 30 days.

Tosh took to Twitter yesterday afternoon to apologize for offending the unnamed victim, writing “all the out of context misquotes aside, i’d like to sincerely apologize. the point i was making before i was heckled is there are awful things in the world but you can still make jokes about them. #deadbabies”

Shortly after the apology, comedian Louis C.K. posted his support for the embattled Tosh, writing “your show makes me laugh every time I watch it. And you have pretty eyes.”

It’s important to note that this story has a few obvious holes. For one, the reporter has remained anonymous—what’s more, the story is a quoted, second-hand account being told by a friend.

The other is that Jamie Masada, the club owner, says the account is not factually accurate.

According to BuzzFeed, who spoke with Masada, Tosh asked the audience what they wanted him to talk about. Someone in the front suggested rape, and a woman in the audience “started screaming, ‘No, rape is painful, don’t talk about it.’ Tosh responded by saying ‘Well it sounds like she’s been raped by five guys,'” Masada told BuzzFeed. “It was a comment—it wasn’t a joke at the expense of this girl.”

The unidentified Tumblr user is moving on, however. Last night, she posted a note to thank those who have shown their support for her friend.

“My friend (who wishes to remain anonymous) is very surprised to have gotten any form of an apology and doesn’t wish to press any further charges against Daniel Tosh,” the note read. “She does plan on returning to comedy shows in the future, but to see comedians that she’s seen before or to at least look up artists before going to their shows.”