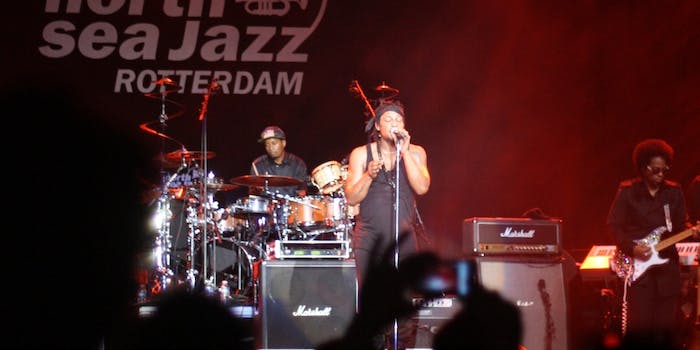 "The Door" is just the beginning.

These digital age marketing event releases follow a clear path—an onslaught of superlatives flutter about, circumstances of the release carry the work atop a cresting wave of social media. At least this time, the record is good.

Black Messiah‘s 12 songs are presented with the covert cohesion of malware that’s bundled into an innocuous software download. Upon first listen it feels like producers wisely rolled tape during sessions and extrapolated the most interesting jams. But that’s just because every offbeat whim is closely parsed and presented in a bubbling stew. Here’s an audit and ranking of each song, after a day spent trying to be productive with this borderline masterpiece on in the background.

This is a brick at the charity stripe—a microwave breakfast, sing-at-the-sun melody with whistles and acoustic blues. It sounds infantile and detached, like Randy Newman singles. The track builds to this sparkling, plugged-in guitar solo, and it’s an overall pleasant arrangement.

The countdown exercise stalls here because this song is two minutes, and it’s basically a laborious extension of “Back to the Future (Part I).” But, there’s this click track metronome-sounding bleep noise that chimes in every four measures. Once noticed, it’s an annoying reminder that no matter how richly organic the sound, there’s a Pro Tools technician on the other end tweaking virtual knobs. The bleep in question sounds like a magic wand granting a wish, and I’m betting it’s a leftover sample; it strikes me as a rare imperfection (because I don’t know why D’Angelo would want it clinking up his record). Sans that picky item, the track’s gospel appeal ruminates nostalgically and with enough eroding torrents that eventually you dig words like, “the seasons may come and your luck may just run out and all that you’ll have is a memory.”

This is the first song the public at-large heard from Messiah, making it a default single. It’s brightly jazzy and walks down into the wine cellar behind the piano line. Seventy-five-year-old session legend James Gadson keeps time on the drums as Welsh technical mercenary and bassist Pino Palladino (The Who sometimes, John Mayer) makes it rain in the corner. It’s holiday cheer, the way your favorite breweries offer up seasonal spirits: with warmth, soul, and punch. But it’s also a situation where the track’s clean-cut timelessness stalls alongside the edge and bite of Messiah’s manic highs.

D’Angelo has been an obsessive Prince fan since he was a piano-playing 3-year-old. The building hand claps here recall Prince’s “Uptown,” ditto the stacked falsetto vocal tracks, driving drums; he even tops in a four-note synthesizer line. This Dirty Mind dap is understated but easy to spot. It’s one he’s been kicking around and testing live for two years, though on the studio mix, D’Angelo has just about hidden any traces of synth.

Don’t let the quilt of a cut here lull you to sleep though; “The Charade” is bluntly political with a hook that chimes, “All we wanted was a chance to talk, instead we only got outlined in chalk.”

This is maybe the least focused, grumpiest song on the record in terms of message. With lyrics written by Parliament Funkadelic newcomer Kendra Foster, D’Angelo complains about general downers: “In a world where we all circle the fiery sun with a need for love what have we become?” He gets into war, pollution, and perilous dissidence. The bass shines, gliding around and stomping like Michael Jackson in the “Billie Jean” video.

There’s not much to interpret here. D’Angelo misses the past and is kind of over your speculative fanboy prodding. “So if you’re wondering about the shape I’m in I hope it ain’t my abdomen that you’re referring to,” he croons in an obvious nod to his iconic “Untitled (How Does It Feel)” music video. But that was 14 years ago, and the body image stress coupled with the creative questions have a player getting stoned in Richmond, Va., and wasting expensive studio time by showing up late and playing video games for hours. All we have are memories, man, now let me rip this bong while the strings make my eyes well because I just want to go back to the way it was.

Here, D’Angelo fleshes out an extended ride in the jazz pocket. It’s brought to life by astonishingly silky, trunk-popping trumpets that show up at the 2:28 mark and carry us out of D’Angelo’s toss-off, post-Stevie Wonder’s “As” lyrics about loving through natural forces. As the mix gets louder, the floating-like-egg-drop-soup Rhodes keys get forced out, and you run back to the start to hear them again.

There’s a great deal mixed in here (yo, is that a clarinet?) but it’s all balanced—even the strings, so often an opportunistic pop decoration, raise the temperature. This is the song about the Spanish-speaking girl in the urban jungle, as evidenced by the Spanish conversation sampled in for dramatic effect (“I loved you but you were so jealous,” the breathy muse says). But quickly the pretty plucking gives the floor to hip-hop drums, and we’re back at 1998’s “Break Ups 2 Make Ups.”

D’Angelo has a one-line hook—”Doo doo wah, I’m really in love with you”—but it’s great because he knows well enough to let the bass talk. The drums are classic hip-hop Questlove, and if there was a place on the record for a Method Man verse, it would have been here.

D’Angelo is well-versed in gospel, but he’s not deferential, and so Black Messiah‘s most centrally faithful song leaves no traces of The Pilgrim Jubilees. There’s an Aaron Hall-inspired sensual tone, but he’s singing Bible scriptures over this stomped, flattened, and stretched-apart church bell sample. The sonic cousin here is “Left and Right” from Voodoo. You’ve heard it, but go ahead and say goodbye to the next five minutes.

Recorded in Manhattan’s iconic Electric Lady Studios, Voodoo was bred from patience and from wholesale classic album jams (Marvin, Curtis, Hendrix) that veered off in interesting directions. “Prayer” feels like the kind of halfway-there jam you warm up with for years before compressing it into four minutes.

Late chairman of the New Black Panther Party Khalil Abdul Muhammed gets a great, harrowing intro sample here. His inflammatory Nation of Islam speeches are morally dubious, racially insensitive, but inescapably thunderous in texture. As such, his voice remains a golden trope for rap samples.

“I’m not talking about some cracker Christ,” the Muhammad speech sample barks over the filthy, pig-slop bass and jackhammer drums. This is the record’s political, indignant apex: “I won’t nut up when we up thick in the crunch, because a coward dies a thousand times, but a soldier dies only once,” D’Angelo sings. At the five-minute mark, he howls like Detroit gospel legend Robert Blair and gets his Band of Gypsies on, shred-wise. It bludgeons.

The closing jam is another one D’Angelo has been workshopping live for two years, and it shows. It’s a nearly six-minute suite of white-collar piano rolls that obstruct the sentimental, funky insides. “Another Life” also features the record’s most transparently sweet lyrics:

How does one attempt to be
The kind of friend that you would want to keep?
I just want to say to thee
Even though it might be hard to believe
The candy-coated thoughts that drift through my sleep
Let me know it’s you that holds the key

But it’s fleeting romanticism, as the chorus sobers up: “In another life, I bet you were my girl.” He’s a big Gap Band fan and throws multiple looks of layered falsetto as a hat tip to early ’80s R&B background singers.

Look, it’s the Side A, Track 1 for a reason. This Sly Stone “Everyday People” groove is a stairway to the food court when you’re stoned. And again, it’s a jam he’s been playing live for two years.

In a recent interview, D’Angelo toasted to his uncle C.C. who weaned him on the childhood funk of the Meters, Ohio Players, and Maurice White. It’s a familiar groove about dangerous and dependent love. But D’Angelo’s thing is that he sears the tenderloin and you get this caramelized, modern plate. Like he tells it, “Ain’t That Easy” is a product of his louder band coupled with his ability to put on blinders and go “deep in the onion” for recording sessions.

Photo via Jago Bayaha/Flickr (CC BY 2.0)