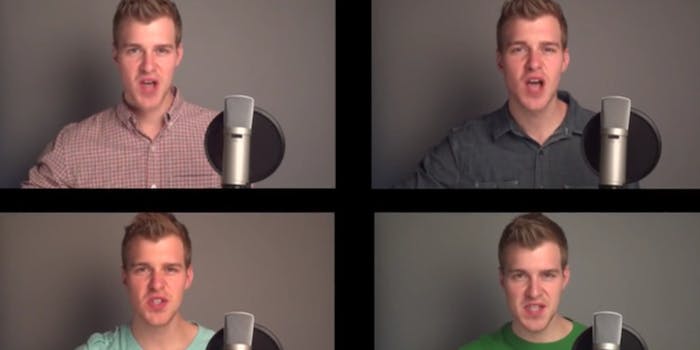 Dan Buckley channels every monster from The Nightmare Before Christmas.

Dan Buckley is a recent graduate from the Boston Conservatory, where he was a voice major. There are videos of him singing Sondheim and flexing his baritone, and one gets the feeling he might be on Broadway someday. Recently, he took his talents in a different direction.

Buckley covered “This Is Halloween,” Danny Elfman’s elaborate opening song from Tim Burton’s holiday classic, The Nightmare Before Christmas. And he did all the different vocal tracks by himself. All 66 of them.

According to his YouTube page, it took five days to get the vocals and harmonies just right in the studio, but only one night to film the video. His hair looks great throughout.

This is certainly an improvement on some of the other covers of the song. Buckley should join forces with Jacob Collier, the British YouTube star who recently did an excellent, six-vocal-track rendition of Stevie Wonder’s “Don’t You Worry ’Bout a Thing.”