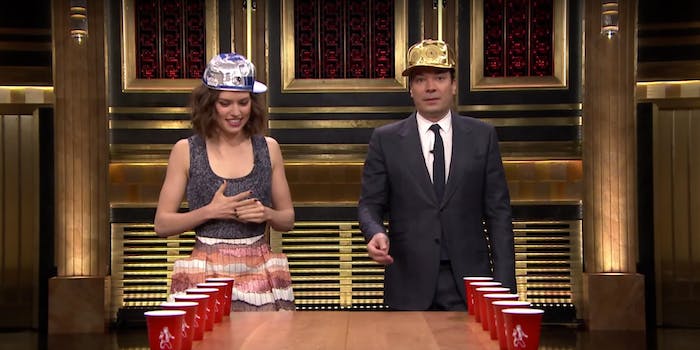 Daisy Ridley can handle her staff and a blaster in The Force Awakens, but she also knows how to deal with a Solo of a different nature.

Ridley and Jimmy Fallon played a game of Star Wars-themed Flip Cup on The Tonight Show—which basically just meant playing regular Flip Cup while wearing R2D2 and C-3PO hats and drinking out of cups with Han Solo on them. And when either of them successfully flipped a cup, Chewbacca growled in approval.

Ridley might not be as seasoned at it as Fallon, who’s been doing this on the show for a while now, but she can hold her own and keep up with his pace—and it beats having to artfully dodge the questions she can’t answer about The Force Awakens for a few more weeks.