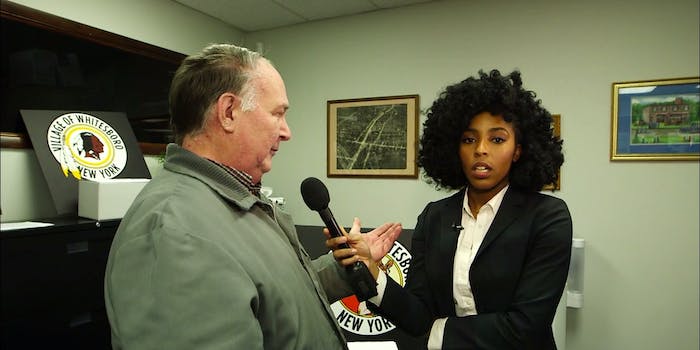 Before it could change, however, locals made some curious arguments.

The Daily Show has a long history of going the extra mile to showcase the strangest stories in the country or expose hypocritical viewpoints, but it’s not often that the story it’s in the midst of reporting on becomes national news.

Daily Show correspondent Jessica Williams went to Whitesboro, New York, to learn about the history of the village’s seal, which features town founder Hugh White holding a Native American by the neck. Some believe the seal is racist and offensive because it shows White choking or pushing the Native American in the seal. Whitesboro mayor Patrick O’Connor insists that the seal depicts a friendly wrestling match that resulted in White gaining respect from the local Native Americans. Williams said she’d expect something like this in the south, but not upstate New York.

While an attempt to change the seal went nowhere years ago, Williams offered some alternatives, which led to O’Connor calling for a vote. It was that vote that created headlines across the country and led some locals to defend the history of the seal in ways just as offensive as the seal itself.

Although the original vote didn’t go in the activists’ favor, Williams later revealed that Whitesboro has decided to change the seal after all. Maybe America isn’t so terrible after all.