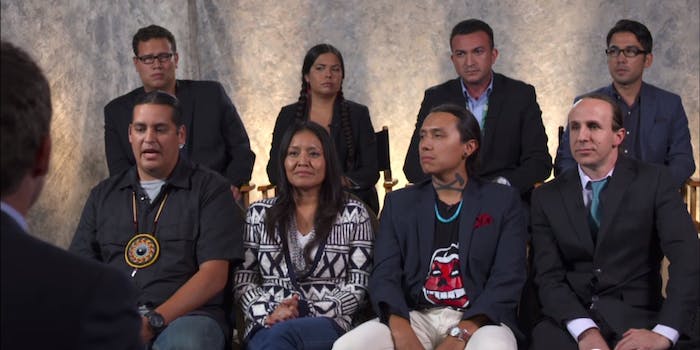 It's about as awkward as you'd expect.

The Daily Show finally aired its investigation on the Washington Redskins team name and logo, and it’s about as awkward as you’d expect.

The pre-packaged segment from Jason Jones caught backlash last week from the diehard Washington fans featured who said that they felt misled and exploited because The Daily Show producers never told them about the prearranged meeting between them and the Native American activists also interviewed for the show. One participant reportedly left the interview in tears and later tried to file a police report but was told that no crime had been committed.

Jon Stewart addressed the controversy head-on before introducing the segment and told his audience, “If we find out that someone in a piece was intentionally misled, or if their comments were intentionally misrepresented, we do not air that piece.”

Most of the actual confrontation detailed in the Washington Post was left on the cutting room floor and focuses on the clashing views between Washington fans and the Native Americans while Jones tailgates at a Washington game with varying degrees of discomfort, and that’s the point. And the fact that many of the tailgaters refused to let their faces be shown on TV—one even after signing a consent form—is telling.