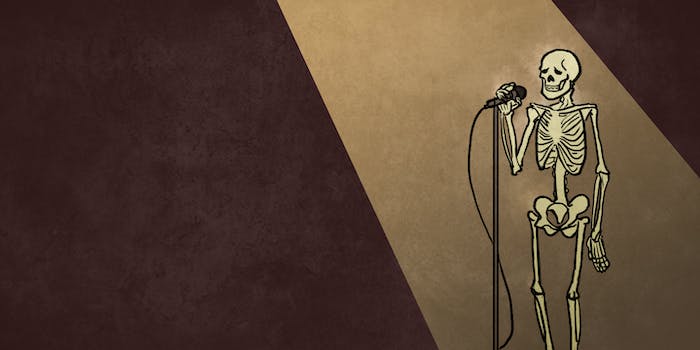 How many bad jokes can one man tell over seven years? Griffin Lewis is trying to find out.

The L.A.-based comedian’s YouTube channel, the Daily Haha, has become the virtual stage for this ludicrous mission. And yes, he knows it’s ludicrous.

“I guess I was thinking about all these people who make a living off YouTube,” Lewis said. “They have an idea or a gimmick they can upload every day, right? If you play video games you upload a video every day, or some people do react videos. They have a video that’s low-effort. … So that’s sort of where my mind was at, and I thought, ‘Oh, it’d be silly to do one of those popsicle-stick jokes every day.’ They’re so lame, who would ever be interested in that?”

He started in January, and as of mid-March he’s blown past 50 videos. He says some of the jokes are literally from popsicle sticks or “lame puns” found in the “public domain of jokedom.” Others are jokes he’s thinking of on the spot. The structure is simple: a setup, a beat, and a punchline. And yes, the jokes are bad. After watching 10 of them, you’ll likely be mad at yourself.

This is part of the experiment, but Lewis also adds his own personal touch. In one clip, he goes deep on the history of the “cross the road” joke.

He says a lot of the humor comes from his “incompetence to deliver on the premise, or my weird persona, which almost seems bored.”

Most of the jokes thus far come in the form of title cards with unfortunate fonts, which only adds the cringeworthy nature of the project. Sometimes Lewis checks in with his own videos. Sometimes he takes his clips to the next level. He even created a terrible trailer for one his jokes.

Of course, Lewis, an admitted fan of Adult Swim and Tim & Eric, does not appear to be a maniac; he’s not actually going to fill the world with lame jokes for seven years. That part was something he added “on the fly,” and it serves as its own meta joke.

“That’s such an absurd and weirdly specific timeline,” he said. “I honestly don’t know where it’s going.

“Most people luckily get the joke,” he continued. “But there are some people out there who actually like these popsicle-stick jokes, and they just kind of want to hear them straight. They don’t want me to add my funny twist to it; they just want me to tell the joke.”

Yes, Lewis’s jokes come off like dad jokes, which are apparently having a moment. Twitter especially has allowed for weird, uncomfortable, absurd, 140-character humor to flourish. Jokes sometimes land with a thud, which makes them that much funnier. The Internet also houses the “longest joke in the world,” the punchline of which elicits a sigh so heavy it could probably be heard from space.

The daily repetition of lame joke-telling has also taught Lewis about structure and delivery—and revealed the cold, hard truth about puns:

“A pun really isn’t funny, is it? The more I think about it, there’s nothing really funny about taking a word and recognizing that it has another meaning. I guess it’s made me think about comedy in general and what is funny. I’ve always thought of comedy as being a subversion of expectations.”

To that point, Lewis says he’s realized another cold, hard truth: that he has to wake up and tell a joke on the Internet every day. This adds yet another layer to the experiment, but he explains that once he gets into the process, he gets inspired. Yes, the visual of a man telling jokes until he’s a skeleton is very funny, but Lewis understands this has an expiration date.

“I do think I’m just going to know when it’s time to end it,” he said. “It’ll just be obvious to me. … It doesn’t become novel until you’re visibly aging.”