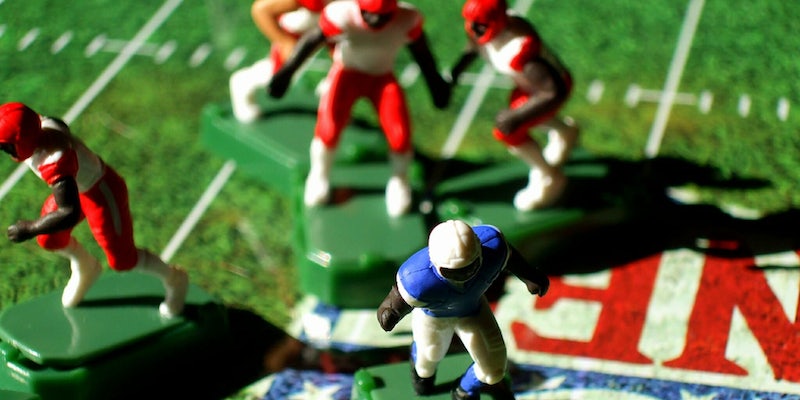 In the past two years, it’s been nearly impossible to get away from the idea—and the countless commercials across every possible medium— that daily fantasy sports websites like DraftKings and FanDuel can make any schlub a millionaire in the span of a day.

But on Monday, it was revealed that there is potentially a serious problem with both of the major daily fantasy sites when DraftKings and FanDuel released a joint statement in which they said they were temporarily banning their employees from playing daily fantasy football on other sites.

Both sites don’t allow employees to play on their own sites, but this latest ban came to light when it was revealed that a DraftKings content manager won $350,000 at FanDuel during the same week he accidentally leaked potential insider data. Apparently the DraftKings employee had not used that information, but the fact he could have to make himself a huge profit at FanDuel is certainly concerning.

“It is absolutely akin to insider trading,” Daniel Wallach, a sports and gambling lawyer in Fort Lauderdale, Florida, told the New York Times. “It gives that person a distinct edge in a contest.”

On Monday, the two sites released a joint statement, via Forbes:

The Fantasy Sports Trade Association (FSTA), DraftKings and FanDuel have always understood that nothing is more important than the integrity of the games we offer to fans. For that reason, the FSTA has included in its charter that member companies must restrict employee access to and use of competitive data for play on other sites. At this time, there is no evidence that any employee or company has violated these rules. That said, the inadvertent release of non-public data by a fantasy operator employee has sparked a conversation among fantasy sports players about the extent to which industry employees should be able participate in fantasy sports contests on competitor sites. We’ve heard from users that they would appreciate more clarity about the rules for this issue. In the interim, while the industry works to develop and release a more detailed policy, DraftKings and FanDuel have decided to prohibit employees from participating in online fantasy sports contests for money.

DraftKings also told the New York Times that employees of both companies had won big paydays on the website of their competitor.

“The single greatest threat to the daily fantasy sports industry is the misuse of insider information,” Wallach told the Times. “It could imperil this nascent industry unless real, immediate and meaningful safeguards are put in place. If the industry is unwilling to undertake these reforms voluntarily, it will be imposed on them involuntarily as part of a regulatory framework.”

As the Kernel pointed out in August, the NFL sees fantasy football as an effective marketing tool, because the league had “found that fans who played fantasy football watched, on average, two more hours of football per week than fans who did not.”

Make no mistake. These fantasy daily sites are a big business for many entities. Both have total funding of more than $360 million, and both are expected to pay out more than $1 billion to its users this year (that total could eclipse $2 billion for FanDuel).

Meanwhile, FanDuel is the exclusive partner of the NBA and has deals with 16 NFL teams, and DraftKings is partners with Major League Baseball, the NHL, and UFC.

This leak, though, could have bigger implications than the possible loss of trust some of these sites’ customers. Congress already has taken an interest in the daily fantasy game, and this latest news likely will only continue to explore the question on why these sites are not considered gambling.

As Democratic New Jersey congressman Frank Pallone, Jr., said last month, via the Committee on Energy & Commerce, “Anyone who watched a game this weekend was inundated by commercials for fantasy sports websites, and it’s only the first week of the NFL season. These sites are enormously popular, arguably central to the fans’ experience, and professional leagues are seeing the enormous profits as a result. Despite how mainstream these sites have become, though, the legal landscape governing these activities remains murky and should be reviewed.”