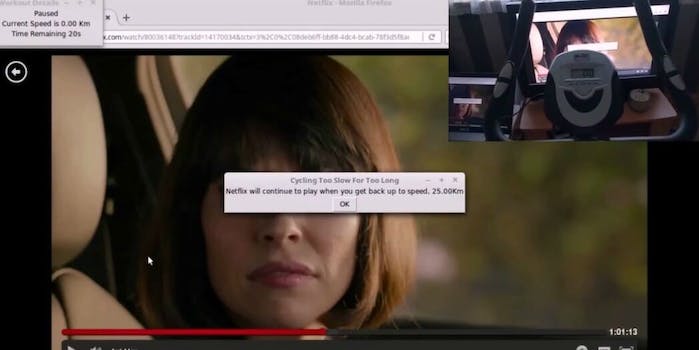 This new contraption will force you to exercise to watch Netflix

Do you sit on your couch watching Netflix for hours at a time while daydreaming about one day getting back into shape? Or do you get bored whenever you work out because there’s nothing but your own heavy breathing to keep you entertained for 30-45 minutes?

This is YouTuber user Ronan Byrne, an electrical/electronic engineering student at the Dublin Institute of Technology.

As he explains in this post, his invention, the Cycflix, “uses a stationary exercise bike connected to an Arduino Nano to control the streaming of Netflix on a PC. … The main gist of the project at the click of a button and some user input, Firefox will open and play Netflix and monitor your speed for the workout routine you designed. If you are going below the speed for too long, Netflix will be paused until you get back up to speed.”

That’s a pretty good incentive to stick to your pace, huh? Watch how it works below.

If you’d like more information, read through his descriptive instructables post. Otherwise, it’s time to get your heart rate up while you binge.