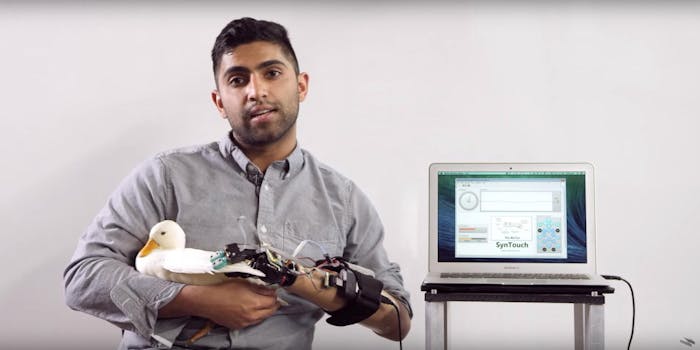 Get ready to learn a lot of fun facts.

Wired and Reddit have combined forces to launch a tech documentary series called Cyborg Nation. The first six episodes went live today, and their captivating subjects will keep viewers enthralled through the run of the series.

It’s hosted by YouTuber Derek Muller (whose personal science channel Veritasium has nearly 3 million subscribers), and each five-minute-or-less episode walks you through a different emerging technology. The topics of the episodes were suggested by people on the r/Futurology subreddit, too, so a lot of the topics are clicky as all hell.

One episode, called “Cyborg Cockroaches Could Save Your Life,” explains how researchers can hack cockroaches’ antennae and control where they walk by strapping a microchip to their backs:

In another, they test robot hands that simulate human feeling by measuring things like temperature and pressure. The test? Petting a bunny and a duck and a tortoise and a chicken:

In another, they look at the exoskeleton technology that’s hoping to help wheelchair users walk on their own:

Wired and Reddit are reportedly planning to team up to host AMA (or Ask Me Anything) sessions with the documentaries’ subjects at some point in the near future, but additional info on that is still to come.

In the meantime, get ready to learn a lot of fun facts. Then keep them in your back pocket as Thanksgiving conversation starters.