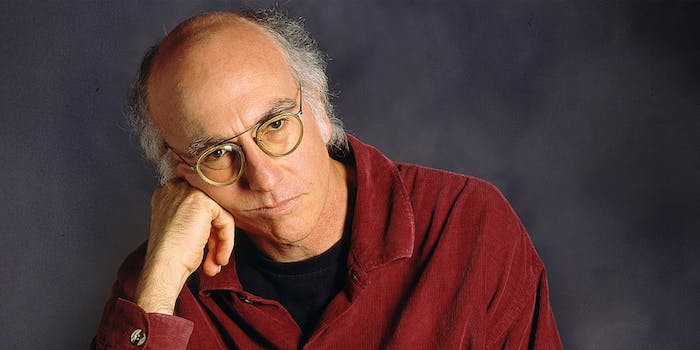 The meme-ification of Larry David and Curb Your Enthusiasm has reached its peak now that David is embodying Bernie Sanders on SNL. And the show’s instantly recognizable theme song has become a default form of punctuation in the Internet age, an update on the sad trombone in a sea of shrugging emoticons.

Now, adding that awkward touch is even easier.

Curb Your Video lets you add the song, which is actually called “Frolic,” to any YouTube video. The examples on the site are expertly punctuated, from that awkward Kanye West interview to that very awkward Bill O’Reilly on-air meltdown.

The site is the latest venture from Dan Brill, a New York City-based copywriter who’s also responsible for Emojinalysis and New Yeezy Resolutions. He wanted to give the people the tool to Curb any YouTube moment they wanted, since it’s now so ingrained in online culture.

“I think the Curb theme has survived online because it’s so in step with the online culture of ‘awkwardness.'” Brill told the Daily Dot. “There’s this trend in the meme world of this bold acceptance, even celebration, of social awkwardness, of feeling like the oddest bird in the room. So people started realizing hey, we all go through this, so let’s just embrace it and make fun of it, which in turn becomes a kind of shared public therapy. The Curb theme comes in because it provides a literal theme song for those moments. And there’s nothing better than a real-life theme song.”

But it’s more than just a shared public therapy.

The site, designed by Brill’s co-worker Phillip Pastore, who created the Say It With Trump website, allows fans to create their own videos as well. There’s also a whole section devoted to the 2016 election, because that’s where we are now.

I used #CurbYourVideo to remix this video of Obama's handshake with Castro. https://t.co/xFXgGsz8LD

Brill said people on Twitter have lamented that they don’t have a way to play the music in real-life situations, and he’s taken this into consideration. Perhaps one day there will be “a little button on your keychain that could cue up the Curb music as you slink out of the room.”

Screengrab via Curb Your Enthusiasm/HBO