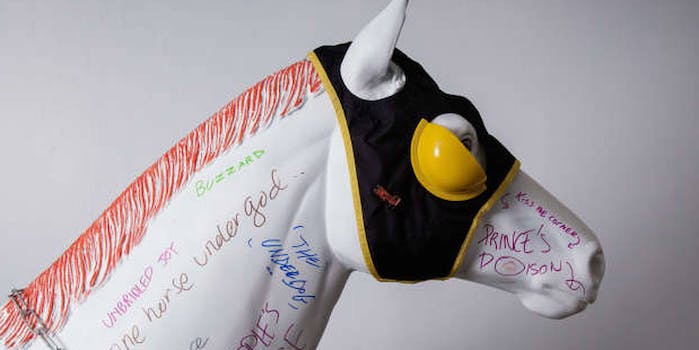 The race to crowdfund a future Triple Crown winner has already raised $37,000

Ever wanted to own a racehorse? Now you can for a very small amount of money.

The story of how Geoffrey Gray and True.ink decided to crowdfund a racehorse that one day could compete in the Kentucky Derby, the Preakness, or the Belmont Stakes is actually a story about how to advance journalism in this technological, dying-newspaper age.

Gray himself is a first-class sports writer whose words have appeared in the New York Times Magazine and Sports Illustrated. He also loves background investigative journalism and whodunnits, and one day, he happened upon on old, pulpy periodical called True that was one of the top adventure magazines in the 1930s, 40s, and 50s. Ernest Hemingway wrote about Cuban fishing streams for the publication, and Pulitzer Prize winner Jimmy Breslin penned odes to racehorses. It was the golden age of magazine writing, and True was among the best.

Gray had never read a magazine that was so well-written, and it got him thinking about the kind of internet site where this kind of writing could be housed, a space where clicks and page views didn’t matter but where experiences do. A place where readers weren’t simply passive customers but where they could be part of the story. He wanted a place in real life where 50 people could come together to cook paella and an online nook where other people could breathe in the results of that feast.

“We want,” Gray told the Daily Dot, “to engage in a deeper way.”

One way to do that, Gray figured, was to pool a bunch of people together and buy a racehorse.

That’s why he created this Indiegogo page for True.ink’s True Stables, where he asked fans to buy a stake in a racehorse so everybody who was interested could guide the animal for its career—so they simply could experience what it was like to own one.

The initial crowdfunding goal was $35,000, and True Stables raised more than $37,000. That means this is actually happening. The horse, thus far, is simply named The People’s Horse, but all 329 owners who have donated thus far will get a chance to choose a trainer, a breeder, and a permanent name. There are also owners’ perks that include feeding the horse, watching it progress from wherever you are in the world, and then taking part in the race day parties. Owners get to be part of the team without much financial investment and virtually zero time spent at the track.

But $35,000 isn’t going to make a huge dent in what it takes to raise, train, and feed a competitive race horse. That’s why this first run of donations is earmarked for exercise, training, and stabling fees for a year. The next step is to actually buy the horse.

“Racehorses are so, so fantastically expensive and extraordinarily fragile,” Gray said. “…A reason why horse owners get into trouble is that they spend all this money buying a horse, but then they don’t have the money to keep it secure.”

Now that training expenses are locked in for a year, True Stables can look forward to actually raising money for a purchase. The first goal is $35,000. The second is $50,000. If people keep donating, the ultimate goal is $100,000.

And yes, it’s possible to get a good, solid horse for those figures. Gray’s goal is to win the Kentucky Derby, and who’s to say that couldn’t happen with a horse bought for $35,000? After all, Seattle Slew—which won the Triple Crown in 1977—was purchased two years earlier for $17,500 (close to $80,000 in today’s money).

“Back in those days in the ’60s and early ’70s, you could go to the sale, and for $100,000, you could buy five really nice horses and have some money left over,” Billy Turner, who trained Seattle Slew, told the Daily Dot. “That’s not so today. But when somebody goes and does their homework and they go in to that ring and start to bid, they can feel pretty safe that they’re getting a really sound individual for not a lot of money.”

The idea for crowdfunding a racehorse began in a supermarket checkout line in Saratoga Springs, New York when the magazine’s credit card was denied multiple times and the man in the checkout line behind grew dismayed at the delay. Turns out he was a race handicapper nicknamed The Wiz, and he was in the process of trying to buy and race his own horse. After hearing The Wiz’s backstory, Gray was hooked. He wanted to buy a race horse and bring his readers along for the ride.

And the racing community has embraced him.

Gray and his team have been traveling with a fiberglass horse (nicknamed The People’s Horse) in which people can sign their name nominations. True Stables was even represented at the Kentucky Derby last month.

Gray was also in Maryland for the Preakness, and on Friday, Gray was hustling around Elmont, New York readying himself for Saturday’s Belmont Stakes.

@MikeTyson The idea is everyone can get behind a horse–as you once told me, animals never judge! pic.twitter.com/665mnit6w0

“This,” Gray said, “allows everybody to have the experience of being a horse owner and to really engage on a story from the inside and not having to be told through the filter of a report.”

“What’s so very true about this project, there’s nothing more inefficient, nothing that doesn’t make any sense in the modern world, than a racehorse,” he continued. “It’s all about efficiency and scale, and if you can’t do that, the modern world rejects you. It’s like that in the media and in a sub sandwich. It’s like that everywhere. But you can’t control a racehorse. You operate on a rhythm that comes from someplace else. It forces us to take a breath, and it embraces the unknown.”

Like those articles that filled the old True magazines Gray fell in love with, this is a good story, potentially a fantastic one. The beginning of the tale has already begun, and it’s a page-turner. For now, there’s no middle and there’s no end. But to Gray, that’s fine. He’s excited about what he doesn’t know, about the journey to some distant location that neither he nor those who have contributed to the cause can visualize quite yet.

It’s like the jockey who’s on the back of the stallion. You can hope to guide the horse to victory, but really, you only have a little bit of control. The horse is really the one in charge.

You? Well, you’re just the one along for the ride.