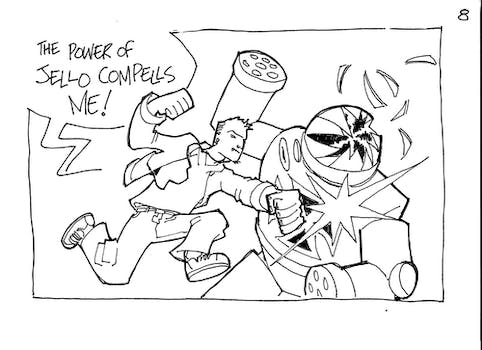 Twitter users ask for specific comics to be drawn and voilà—they get results.

Godzilla, Nazi robots, and Winston Churchill: Those are just a few of the characters that do battle in the latest community comic to be created on and for Twitter.

The United Kingdom website Monkey on my Back (@MOMBCOMICS) crowdsourced a 24-page comic on Saturday. The series was based entirely on submissions by users of the microblogging site and illustrated by David Wynne (@davidwynne), a South London cartoonist best known for his Particle Fiction series.

Dubbed #twittercomic2011, the project started with an open call for storyline submissions on Nov. 22. The winner was Twitter user and fellow illustrator @WarwickJC, who suggested “A guy has different superpowers depending on what music he’s listening to.”

That idea didn’t go live, however, until Dec. 3. Twitter’s hivemind then submitted names, plot ideas, and dialogue as Wynne worked in real time, with a soundtrack provided by the Dead Kennedys and Electric Six.

“I was drawing more or less non-stop for 12 hours (well, okay, I did stop to have dinner- but apart from that), and the comic ended up being 24 pages long (although most of those pages are only two panles [sic]- and many are single panel splash pages),” Wynne wrote Sunday, posting to his Tumblr, where the full comic can be viewed.

The result, curated in the Storify by MOMBCOMICS below, not only captured the evolution of a comic but also the spirit and creativity of the community that brought it to life.

Yel Zamor (@YelZamor) said it best. “Thanks guys for entertaining us. It was brilliant following the comic play-by-play, great fun!