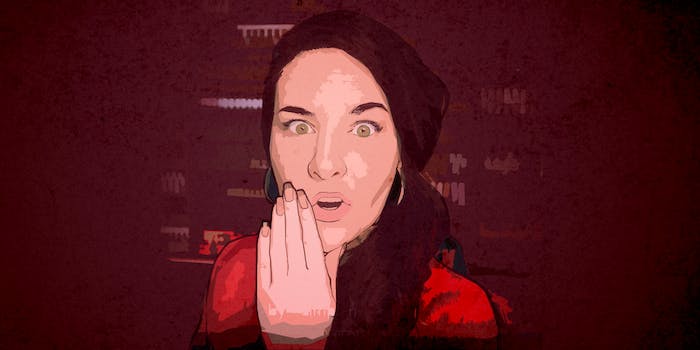 Paint nails and have fun before you die.

This summer, in her quest to conquer “Polish Mountain,” nail art extraordinaire Cristine Rote unintentionally created one of this year’s most popular video trends. Rote’s motto is “paint nails and have fun before you die”—and it’s why millions of viewers can’t get enough.

But behind the polish, the Canadian finger decorator is a welcoming, vital YouTube presence.

It all began in 2014, when Rote decided to bring her passion for nail art to the web and opened her blog and YouTube channel, Simply Nailogical. Over the past two years, Rote has gained a loyal following of nail enthusiasts and risen in popularity for both her designs and sarcastic commentary. Her tutorials—while colorful and unique—are narrated in a tone that blends the styles of Grace Helbig and Threadbanger.

With a collection of more than 1,000 nail polishes, Rote told Nail It! magazine that she paints her nails up to six times a week, and will spend anywhere from one to three hours working on a design. With over 235 tutorials on her channel, Rote has treated her audience to everything from back-to-school nails, care tips, and the now-infamous Polish Mountain.

But what is Polish Mountain? This is a topic I’ve spent the last week chatting in depth about with anyone who will listen.

In June Rote filmed a fan recommendation in which she painted 116-plus coats of nail polish on her nails. The video took her over 15 hours and, along with it gaining 16.3 million views, spurred the “100 Layer Challenge.”

The trend has since lead to hundreds of creators layering up with everything from foundation, self tanner, Nair, T-shirts, lipsticks, cookies, and more. Despite it now being two months old, the challenge has yet to lose steam with videos such as Riyadh’s “100 layers of self tanner” gaining international attention and the Fine Brothers making Rote’s original into a React episode.

In the wake of viral fame, Rote has seen her subscriber count double to more than 2.5 million fans. While this quick rise to YouTube stardom might go to some creator’s heads, Rote has continued to endear viewers with her easygoing nature and well-timed bad jokes. Rote’s viral trend will eventually bid farewell to the spotlight. Before it does, it should be recognized for its true success: Creating a rare moment for all viewers to enjoy and understand beauty content on YouTube.

If you’re a makeup noob like me, the beauty community can feel like an impenetrable group whose tutorials and product reviews aren’t representative or financially possible. But videos like Rote’s make the topic fun, and diversify how we think about beauty gurus.