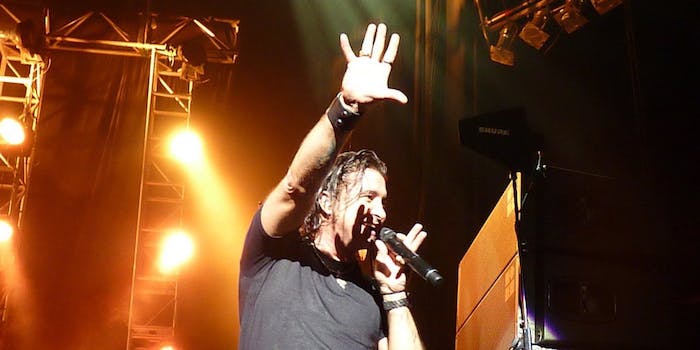 Creed singer Scott Stapp has fallen on hard times. In a 15-minute video uploaded to the band’s Facebook page Wednesday morning, Stapp claims to be living in a Holiday Inn and “penniless.” Before that, Stapp said, he was living out of his truck and didn’t eat for two days.

While reaffirming his commitment to his Christian faith in the video, Stapp is seen visibly angry and seeking retribution, claiming that there are people in his circle spreading a “vicious attack” on his character, sobriety level, and personal finances. He said a personal audit eight weeks ago revealed that “a lot of money was stolen from me or royalties not paid and that’s when all hell began to break loose.”

And while he had “nothing but forgiveness” for his assailants, Stapp said that his three kids are on the receiving end of verbal attacks in their peer circles and that is at the heart of why he decided to upload this video. Stapp also said that the IRS has frozen his bank accounts and that his civil rights have been violated, although how, specifically, is never revealed. He also claims to have recorded phone calls with his bank’s customer service representatives.

“I’m going to expose and I’m going to fight every single individual that is responsible for this,” Stapp said.

To do that, Stapp solicited an “honest, good attorney” from, hopefully, a fan in his network. Stapp also mentioned the Ferguson verdict and said that “America’s not right… This is not the country I grew up believing in.”

The rant comes in the same month where Stapp’s wife filed for divorce. According to a Miami Herald report, Stapp has “become a paranoid shell who has threatened to kill himself and harm his family.”