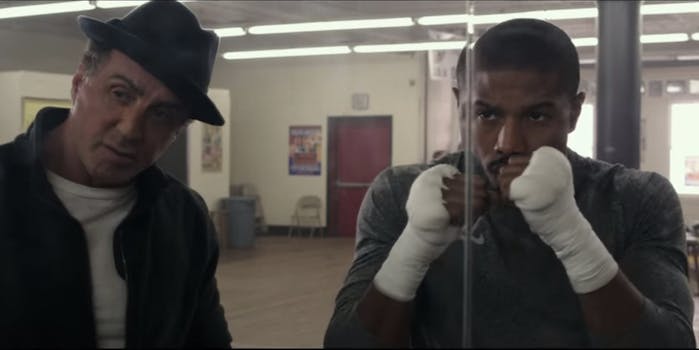 Promising ‘Creed’ trailer looks like much more than a ‘Rocky’ spinoff

Don't call it a comeback.

Oh, the old Hollywood reboot. You think you’ve seen all you can see, and then they hit you with a reimagined Star Trek, two Ghostbusters movies, and a third (third!) Spider-Man. What’s next? Addams Family 3.0, ReBoot: The Reboot?

But what is it when it’s simply a new chapter in an ongoing narrative? Take, for example, the much-anticipated Creed, Ryan Coogler’s (Fruitvale Station) Rocky spinoff. This movie feels like anything but a reboot, and to call it a spinoff feels disingenuous. And judging by the trailer released Tuesday, Creed is going to be a movie that stands on its own—a story that just so happens to take place in the same universe Rocky Balboa (Sylvester Stallone) inhabits.

Creed stars Michael B. Jordan (Fruitvale Station, Friday Night Lights) as the titular Adonis Creed, son of the fallen champion Apollo Creed, Rocky’s challenger-turned-best bud, who’s got a chip on his shoulder that only boxing can fix. With the help of the Italian Stallion, the young Creed will have a chance to prove himself a worthy contender. Through Adonis, it looks like Rock may find the closure he desperately needs in dealing with the 1985 death of his best friend by the cursed, red hands of Ivan Drago (Dolph Lundgren).

Personally, I’m most excited for the training montage.

Creed steps into the ring Nov. 25.