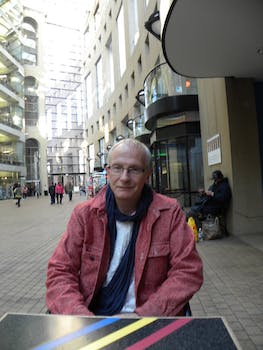 You may have read Craigslist ads. But have you ever heard them sung?

That might be how Hemingway would write it now, if he were writing it on Craigslist.

Craigslist? Yes: Craigslist is to human longing as the Great Library of Alexandria was to philosophy. It is the single greatest repository of naked need in human history. But where are the odes to Craigslist? Where is its Poet Laureate?

In answer to this, PuSh, a groundbreaking performing arts festival in Vancouver, is debuting the 80-minute comedy musical “Do You Want What I Have Got? A Craigslist Cantata,” by Canadian legends Bill Richardson and Veda Hille.

The project, which originally began as a short piece commissioned for PuSh three years ago, opened Jan. 19 as full-length production that runs until Feb. 11 at the Arts Club Revue stage on Granville Island. After that, companies from all over the country are lined up and waiting to bring it to their cities.

I caught up with Richardson at the Vancouver Library for a quick interview on the art of turning dross into gold, or classifieds into fine art, or at least cabaret. Here’s our interview:

Richardson is indeed legendary in Canadian intellectual circles for his popular show on CBC radio as well as for his award-winning books like Bachelor Brothers’ Bed & Breakfast.

He also turned out to have once shared a neighborhood with me.

The interview got off to a good start when I described an art project I used to admire in the same neighborhood. It was simply “the most beautiful art project I ever saw,” I told him. As I described the work—dozens upon dozens of steel kitchen ladles suspended from invisible thread, each holding a tiny votive candle and revolving slowly in the draft—his face softened, and he cast his eyes downward.

“That was my house,” said Richardson, softly. “That was my art project, and thank you. I hardly got any feedback on that at the time, so thank you.”

Note to self: begin all interviews this way.

Once settled into his chair in the atrium of the Vancouver Central Library, he amiably expanded on the origin, development and meaning of “Do You Want What I Have Got?”

After a disillusioning experience with online classifieds, Richardson looked to Craigslist to see what it could teach him about his own needs and those of its inexhaustible supply of strangers, some stranger than others. The result was popular enough that Richardson and Hille, who normally earns her crust composing indie rock, were commissioned to turn it into a full-length piece.

All the songs in the piece have their origin in real ads, so all of the heartache, kink, and barely-repressed urges (to celebrity, to notoriety, to serenity) are genuine to someone, somewhere. Yes, even the one about the guy with the bathtub full of noodles in which you must sit for at least five minutes (do not bring sauce!).

It’s tempting, but not that easy, as it turns out, to simply poke fun at these sometimes-desperate expressions of human need.

Instead, the (excellent) performers are given rein to find dignity in any and all strange situations. There’s the man who just wants to trade his fresh chili for some weed and company (and is also, by the way, interested in meeting fellow men for casual coffee … in their underwear … and maybe hugs … but he’s NOT GAY!). You will never hear the words, “But I’m TOTALLY NOT GAY” delivered with quite as much querulous, Ethel Merman-esque, conviction, ever again.

The songs may mock, but they mock fondly, reminding the audience that we are all human, and therefore all ridiculous.

Is the Internet a dividing force, or is it one place where otherwise lost souls can connect with, say, someone who really needs their 300 stuffed penguins, who really understands them? The penguins? Or the owners? Or is the one just the manifestation of the other’s dreams and desires? These are the questions asked by the Craigslist Cantata.

In our interview, Richardson mused on the authenticity of the piece: did it lose by being static, with fixed songs, fixed lines, fixed roles, when the material on which it is based is ever-changing?

Essentially, a theatre piece can only be a snapshot of a point in time, and this one reflects some of the best, quirkiest, or most moving Craigslist postings of the past couple of years, but doesn’t pretend to be a re-creation of the Internet at a particular moment. For one thing, there’s just too much of it.

The commodification of human interaction is one of the defining themes not only of the Craigslist Cantata, but of our age; how seemingly simple, commercial offerings speak eloquently, if unintentionally, of the fundamental need for connection.

As the song goes, Can Anybody See Me (if there’s no value attached).