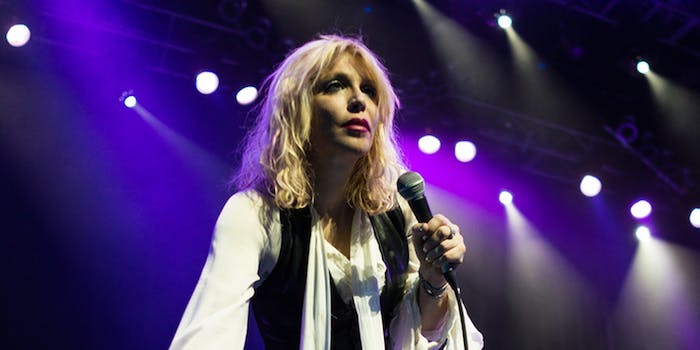 Courtney Love has been poking some holes in theories.

The mystery of missing Malaysia Airlines flight MH370 has now officially reached a fevered pitch. As the search for the plane expands, the Internet has now officially launched its own investigation… led by one Courtney Love Cobain.

The musician and newly-minted YouTube star took to Twitter and Facebook late last night, to offer her own theory on the missing plane, using crowdsourced satellite images and some intel she may have gleaned from Reddit.

I’m no expert but up close this does look like a plane and an oil slick. https://t.co/AR005kNTYR prayers go out to the families #MH370

When she was met with skepticism, she stood her ground with an annotated screenshot of what might be the plane, and an oil slick.

really? look closer? check it out @DR24 #MH370 and its like a mile away Pulau Perak, where they “last” tracked it pic.twitter.com/tqavAe4zIL

Social media then exploded with dream scenarios in which CNN and AP interviewed Love after she discovered the missing plane.

Just imagine if Courtney Love did actually find that plane.

Someone please put her in charge of this investigation.