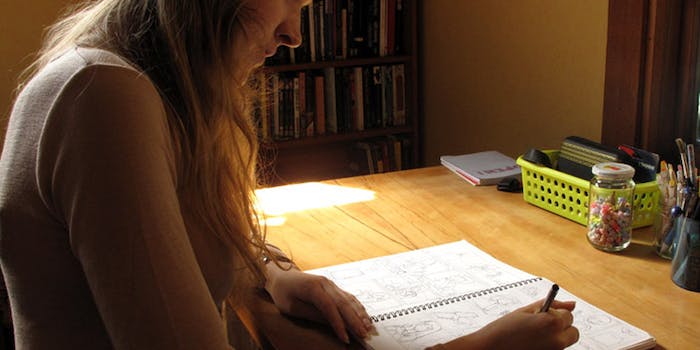 Wishes really do come true when you count stars

Over the last 60 years, the term white knight has come to represent friendly investors eager to help out struggling businesses. In literature a white knight often represents a strong male character who saves the damsel in distress.

This literary device is used in artist Katie O’Neill’s stunning comic series Counting Stars, the only difference is her white knight doesn’t save the girl in the end. He just inspires her.

Counting Stars is a seven part series that tells the story of a lonely teenage girl who is visited by a white knight in a dream. The knight tells her that if she makes 1,000 paper stars, her any wish would be granted. Without a wish in mind, the girl decides to make a star every time she is lonely, quickly collecting 1,000 over the course of the series. Near the end of the comic the white knight reappears to save the day. But little does he know that’s not what she wants.

“I don’t want to run away from my problems. And I don’t need a white knight to rescue me,” says the girl. “All I ever wished for was a friend.”

And that’s far more important than being saved, O’Neill, 20, told the Daily Dot.

“I definitely wanted to invert the trope of having a dashing white knight ride in and fix everything because a lot of the time, people don’t want that. They just want a strong hand to lift them back onto their feet, and to be their friend and support. As nice as it is to make a wish, I wanted to show someone deciding to solve her own problems. I think it’s important to portray female characters in particular who take command of themselves and fix their lives, rather than just being swept up by prince charming without ever really solving anything.

O’Neill is a self taught artist who spent weeks creating the comics, first sketching them out by hand then scanning them into the computer. She then traced and colored them using Photoshop and Easy Paint Tool SAI.

She put together the entire series for a creative writing competition run by Auckland University of Technology with an option to enter a graphic novel between four and eight pages. While the winner of the contest will be announced at the end of March, O’Neill has already won over the hearts of thousands of Tumblr users.

“I just literally cried,” commented infinite-shade. “This has been my life for so long, up until recently. This is so beautiful.”

O’Neill posted the comics on her blog about a week ago and has since collected more than 52,000 notes. No matter how she places in the contest, the response her work has received on Tumblr has inspired her to keep drawing.

“It’s been absolutely astonishing,” she said. “A lot of people seem to either relate to that sense of loneliness, or else appreciate how lucky they are that they do have their friends to lean on. That need for one good friend is, I think, is universal.”